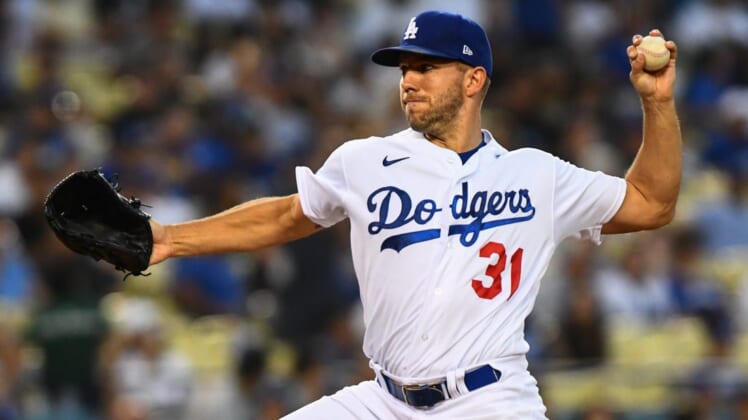 Mookie Betts led off the eighth inning with a triple and scored the go-ahead run on a Will Smith ground ball as the Los Angeles Dodgers pulled off a 2-1 victory over the visiting Miami Marlins on Friday.

Trayce Thompson also drove in a run and Evan Phillips earned his second save as the Dodgers returned from a 4-3 road trip to win their seventh consecutive home game. Los Angeles improved its baseball-best record to 82-36.

It was a battle of left-handers as the Dodgers’ Tyler Anderson gave up one run on five hits over seven innings while the Marlins’ Jesus Luzardo allowed one run on four hits over 6 1/3 innings. Luzardo’s innings total and pitch total (100) were season highs.

The Dodgers looked as if they would get off to a fast start in the opener of a six-game homestand. Betts led off the bottom of the first inning with a double to left-center, but he was stranded when Luzardo retired Trea Turner, Freddie Freeman and Smith.

The Marlins had two aboard with one out in the third inning, but Anderson wiggled out of trouble by getting Jon Berti to ground into a forceout before Miguel Rojas struck out.

When Jacob Stallings doubled to lead off the seventh inning, it gave the Marlins a runner in scoring position in four of five innings. Jerar Encarnacion then delivered a two-out double to left-center for a 1-0 lead.

The hit was the second for Encarnacion in his third major league game. His only other hit was a grand slam in his major league debut June 19.

The Dodgers responded in their half of the seventh. Justin Turner led off with a single and scored on a two-out double from Thompson two batters after Luzardo was replaced by Steven Okert.

Betts tripled to open the bottom of the eighth against former Dodger Dylan Floro (0-3). Smith hit a one-out ground ball to third, but Berti never made a throw with catcher Jacob Stallings abandoning home plate.

Chris Martin (4-0) pitched a scoreless inning to earn the victory. Phillips took over as the Dodgers’ closer, at least for a day, after Craig Kimbrel gave up a run in four of his past six outings. Phillips tossed a 1-2-3 inning to seal the win.