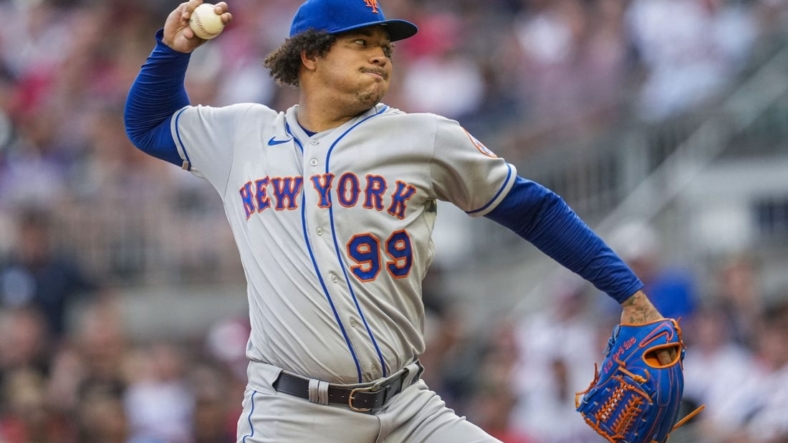 If the season ended today, the Los Angeles Dodgers and New York Mets would be the top two seeds in the National League playoffs.

However, as the teams begin a series that will bridge August and September, only the Dodgers have the luxury of beginning to plan for October.

The Dodgers will continue shuffling their rotation throughout the three-game series against the host Mets that will begin Tuesday night.

Both teams head into the series fresh off series wins in four-game sets against sub-.500 opponents. The Dodgers edged the host Miami Marlins 3-2 in 10 innings on Monday night for their third win in the series. The Mets were off Monday after missing a chance at a sweep of the Colorado Rockies on Sunday, when the visitors eked out a 1-0 win.

Los Angeles’ pitching depth was on display again on Monday, when scheduled starter Tony Gonsolin — who is tied for the major league lead with 16 wins and leads the NL with a 2.10 ERA — was placed on the injured list due to a right forearm strain. Michael Grove was recalled from Triple-A Oklahoma City, and he allowed two runs in 4 2/3 innings.

Dodgers manager Dave Roberts said Gonsolin should require only a minimum stay on the shelf. He also indicated a big lead in the NL West — major-league-leading Los Angeles sits 19 1/2 games ahead of the second-place San Diego Padres — played a factor in looking ahead to Gonsolin’s potential usage in the playoffs.

“He’s gone so hard all year,” Roberts said of Gonsolin, whose 128 1/3 innings are just 14 fewer than he threw in his first three big league seasons combined. “So to make that IL move, to skip two starts, it just didn’t seem like a whole lot of cost. And hopefully that’ll kind of reset him and get him ready for the postseason.”

The Dodgers’ rotation could get a boost later this week with the return of three-time NL Cy Young Award winner Clayton Kershaw. The Hall of Fame-bound southpaw, who hasn’t pitched since Aug. 4 due to a lower back strain, threw a bullpen session on Monday and is a candidate to start the series finale.

While the Mets are on a 103-win pace, they are just three games ahead of the defending World Series champion Atlanta Braves in the NL East. The division winner is all but certain to get the second bye, but the second-place finisher will be forced to start the playoffs in a best-of-three wild-card series.

Facing the Dodgers — who are 56-22 since the start of June, just ahead of the Braves (56-23) for the best record in baseball in that span — will be another test for the Mets, whose schedule eases up considerably for most of September. New York is slated to send two-time Cy Young Award winner Jacob deGrom to the mound in Wednesday’s middle game.

“You play this game to face the best,” said Mets pitcher Max Scherzer, who finished last season with the Dodgers before signing with New York as a free agent. “It’s a great opportunity for us, a great challenge to go out there and face them.”

Heaney, who will make his 10th start of the season Tuesday, earned a win on Wednesday when he allowed two runs on four hits over six innings as the Dodgers beat the Milwaukee Brewers 12-6. He struck out 10 and walked one.

Walker didn’t factor into the decision Aug. 23 after surrendering two runs on four hits over five innings as the Mets fell to the New York Yankees 4-2. He fanned three and walked two.

Walker owns a 3-3 record with a 4.25 ERA in 10 starts against the Dodgers. He lost at Dodger Stadium on June 2 after giving up two runs on seven hits in 5 2/3 innings.