Dodgers first baseman Max Muncy left Los Angeles’ Friday game against the visiting Texas Rangers after one inning due to right side tightness.

Muncy hit a two-run home run in the opening inning off Rangers right-hander Mike Foltynewicz, his 14th of the season. It was one of three home runs for the Dodgers in a six-run first.

Muncy had been dealing with a sore right ankle, an injury that happened when he was trying to beat out a double-play grounder on June 4 at Atlanta. He did not play Saturday against the Braves and has been in and out of the lineup since. 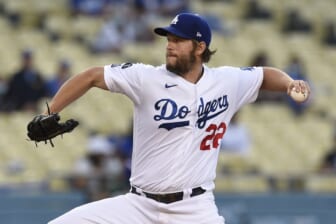 Muncy was replaced at first base by Albert Pujols to begin the second inning.

Off to an All-Star caliber start to the season, Muncy is batting .264 and has 33 RBIs. He entered Friday night leading the National League in walks (46) and on-base percentage (.416).

Bellinger exited in the fifth inning after hitting an RBI single to center field. He hobbled to first base and immediately was removed for pinch runner Zach McKinstry.

Bellinger was playing in just his 12th game since returning from a hairline fracture in his left leg. He has collected a hit in five of his past six games and is batting .226 on the season with one home run and 10 RBIs.