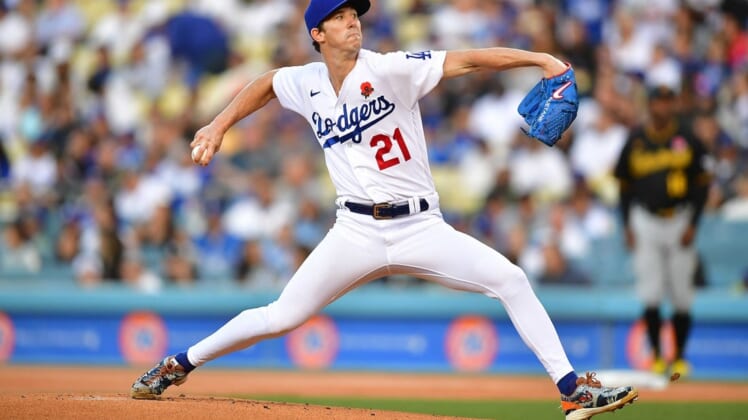 The San Francisco Giants haven’t seen the Los Angeles Dodgers in the Bay Area since last Oct. 14, when the Dodgers’ win in the decisive Game 5 of the National League Division Series left the hosts dealing with the sudden end to one of the greatest seasons in franchise history.

The Giants still will look to recapture the magic of last season on Friday night when they host the Dodgers in the opener of a three-game series.

Both teams played matinees on Thursday. The Giants fell 4-2 to the visiting Colorado Rockies in the rubber game of a three-game series, while the Dodgers earned a series win by overcoming an early four-run deficit to edge the host Chicago White Sox 11-9.

The Giants played a sloppy game Thursday, emblematic of the difficulty they’ve had in repeating their all-around performance of last season, when they won a franchise-record 107 games and finished one game ahead of the Dodgers in a classic NL West race.

The Giants led the NL in OPS last year (.769) and finished second in ERA (3.24) while finishing with 32 defensive runs saved above average, eighth best in the league.

They currently are fifth in the NL in OPS (.725) and ninth in ERA (4.22). San Francisco entered play Thursday next-to-last in the league with minus-25 defensive runs saved above average — and that was before committing four errors against the Rockies.

The Dodgers displayed their typical thoroughness in the comeback win over the White Sox. After scoring six times in the fifth inning to take the lead, Los Angeles added four runs in the sixth, when struggling Max Muncy hit a three-run homer immediately after Chicago manager Tony La Russa ordered Trea Turner intentionally walked despite a 1-2 count.

Muncy, who finished 10th in the NL MVP balloting last year but missed the playoffs after tearing an elbow ligament in the regular-season finale, was in his first game back following a two-week stint on the IL due to continued trouble with his left elbow.

He celebrated his return by going 2-for-5 with a season-high five RBIs.

“I truly believe he’s a game-changer in this lineup,” Dodgers first baseman Freddie Freeman said of Muncy. “To get him back in the lineup, it’s no surprise we scored so many runs (Thursday).”

Junis earned the win in his most recent start, when he gave up one run over six innings as the Giants beat the host Miami Marlins 5-1 on Sunday. He has never opposed the Dodgers.

Buehler took a loss on Saturday after surrendering five runs over 2 1/3 innings — his fewest ever in a start — as the Dodgers fell 9-4 to the visiting New York Mets.

The teams met twice in Los Angeles in early May, and the Dodgers recorded 3-1 and 9-1 wins.