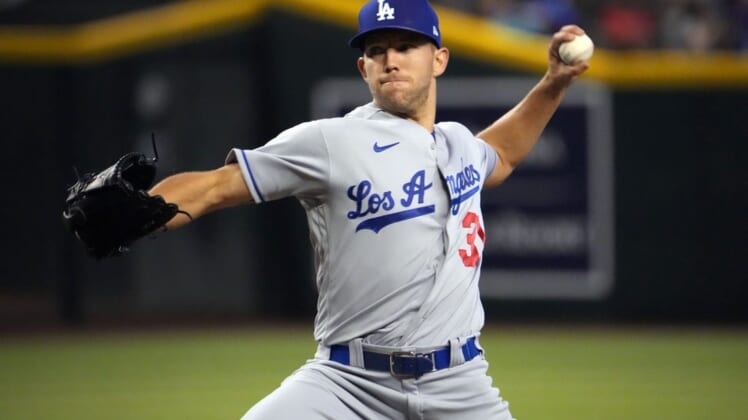 A pair of pitchers who have been a boon to their new teams will square off Friday night when the Los Angeles Dodgers host the New York Mets in the second game of a four-game series between first-place teams.

Anderson wasn’t even in the Dodgers’ rotation when the season began, instead serving as the long man out of the bullpen. An early elbow injury to another Dodgers’ newcomer, Andrew Heaney, put Anderson in the hot seat, and he has been productive ever since.

Signed as a free agent after posting a combined 4.53 ERA in 31 starts with the Pittsburgh Pirates and Seattle Mariners last season, Anderson has been better than ever in his seventh season. He has won five of his seven starts since moving into the rotation.

After left-hander Clayton Kershaw hit the injured list May 13, Anderson kept on producing to help stabilize the Los Angeles rotation. In fact, Anderson has been even better since Kershaw went on the shelf, going 3-0 in three starts with an ERA of 0.86.

“This guy made pitches when he needed to,” Dodgers manager Dave Roberts said after Anderson went six scoreless innings in a victory Sunday over the Arizona Diamondbacks. “He sequences really well. He changes arm angles, and I love his pace of play. It keeps the defense involved. I can’t say enough about him.”

In three career starts against the Mets, Anderson is 1-1 with a 3.31 ERA. The lone victory came last season when he held New York to two runs on six hits over five innings and added his own home run in the game.

Bassitt also has been a key contributor amid potentially devastating injuries. Jacob deGrom hasn’t thrown a pitch all season, and Max Scherzer hasn’t started start since May 18.

Acquired in a trade from the Oakland Athletics in March, Bassitt has made a smooth transition to the National League after seven seasons in the American League.

After his worst outing of the season May 24 against the San Francisco Giants, when he allowed eight runs in 4 1/3 innings, Bassitt rebounded Sunday to give up just one run over six innings in a no-decision against the Philadelphia Phillies.

Bassitt lost his chance at a victory when the Phillies took the lead in the eighth inning. But the Mets scored once in the ninth to tie it and once in the 10th to win it for the third victory of a six-game winning streak that ended with Thursday’s 2-0 loss to the Dodgers.

“It happens because we believe in it,” Bassitt said of the Mets’ grit, which failed to surface for the first time in a week Thursday. “Get us down a little bit, but we’re just not gonna quit. You’ve gotta get 27 outs or more versus us, and it’s hard to do.”

Bassitt will make his Dodger Stadium debut. In his lone outing against Los Angeles last season, he gave up four runs on nine hits over six innings while taking the loss.

His toughest challenge figures to come from the Dodgers’ Trea Turner, who is on an MLB-best 25-game hitting streak.