Dodgers look to rebound vs. Brewers after rare loss 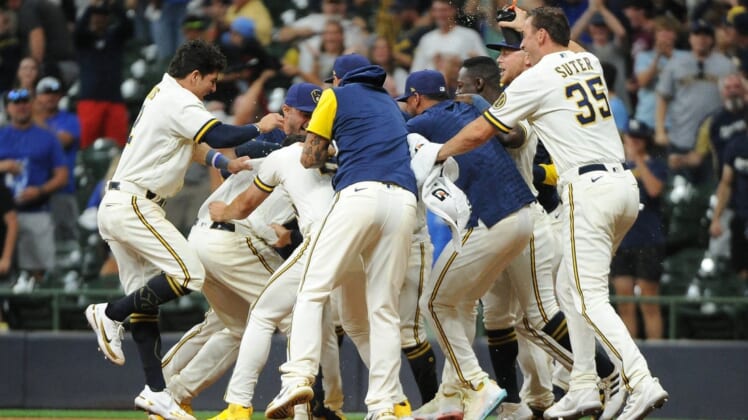 The Los Angeles Dodgers will look to bounce back behind All-Star right-hander Tony Gonsolin when they face the host Milwaukee Brewers on Wednesday night in the third game of their four-game series.

The Brewers evened the series Tuesday night, rallying for a 5-4 victory on Victor Caratini’s bases-loaded single off closer Craig Kimbrel in the 11th inning.

After scoring their first three runs on solo homers, the Dodgers had gone ahead 4-3 in the top of the 11th on Justin Turner’s RBI single.

“They’re a tough team to beat,” Brewers manager Craig Counsell said. “We played a good game tonight, and you have to play like that to beat them.”

The Dodgers, who lost for just the fifth time in 25 games since the All-Star break, have won 13 of their last 15. They have not lost two in a row since July 25-26 against Washington.

The Brewers, who had dropped three of their last four while scoring just seven runs, improved to 51-18 when scoring four runs or more in a game. Milwaukee’s offense got a boost Tuesday night from Christian Yelich, who snapped an 0-for-26 skid with a 451-foot homer, his first home run since July 2.

The home runs by Cardinals sluggers Paul Goldschmidt and Nolan Arenado were the first time Lauer had allowed more than one homer in a game since June 22.

“I think the one to Nolan might have been the worst pitch I’ve ever thrown in my life,” Lauer said after that outing. “I mean it was a changeup middle-middle, and good hitters are not going to miss that.”

Lauer is 6-0 with a 2.56 ERA in nine career starts vs. the Dodgers, including one win in two starts against them last season.

Gonsolin, tied for the NL lead in wins, has won three straight since his only loss of the season. Opponents are batting just .173 against him.

In his last start, Gonsolin took a no-hitter into the seventh inning and allowed just one run on two hits in 6 2/3 innings in an 8-3 win over Kansas City.

“It was pretty solid, and I felt like I was throwing a lot of strikes,” Gonsolin said. “They were swinging a lot, which helped keep my pitch count down and made some good pitches early to get some soft contact.

“I put together two good outings in a row now,” he said. “I need to keep it going, one outing at a time, and today was pretty good.”

Freddie Freeman, who doubled in Tuesday night’s loss, is batting .370 with 11 doubles, a triple, 11 homers and 26 RBIs in his last 26 games against the Brewers.