Clayton Kershaw's postseason misery has been a defining part of his legacy but he has done wonders to change that narrative... 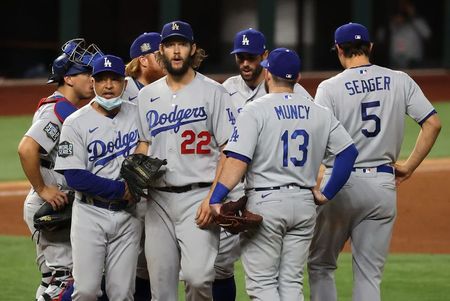 (Reuters) – Clayton Kershaw’s postseason misery has been a defining part of his legacy but he has done wonders to change that narrativeby putting his Los Angeles Dodgers on the cusp of their first World Series title since 1988.

One of the best pitchers of his generation, the Dodgers ace, 31, has enjoyed a breakthrough October and soaked up the moment on Sunday after paving the way for a 4-2 win over the Tampa Bay Rays and 3-2 lead in the best-of-seven World Series.

“Any time you can have success in the postseason, it just means so much,” said Kershaw. “It’s what you work for, it’s what you play for this month. I know what the other end of that feels like, too, so I’ll definitely take it when I can get it.”

The elite left-hander’s regular-season greatness had, until this year, never fully translated to the playoffs and without him the Dodgers would probably not be in the World Series for the third time in four years.

Kershaw set the tone in the World Series opener when he struck out eight Rays batters and allowed just two hits over six innings as the Dodgers drew first blood.

Then, Kershaw helped his club wrestle back control of the series on Sunday when he limited the underdog Rays to a pair of runs in an effective 5-2/3 innings.

Kershaw, a Dallas native, could get his first taste of a World Series title on Tuesday in nearby Arlington, Texas, where the entire championship round is being played in front of a limited number of fans because of COVID-19.

“I don’t want to say it’s working out the way that I wanted it to, just because being at Dodger Stadium would be awesome, too,” said Kershaw.

“But to get to have family and friends here, to get to have as packed a house as it can be and make it basically seem like it’s all Dodger fans, is very special as well.”

(Reporting by Frank Pingue in Toronto; Editing by Mark Heinrich)