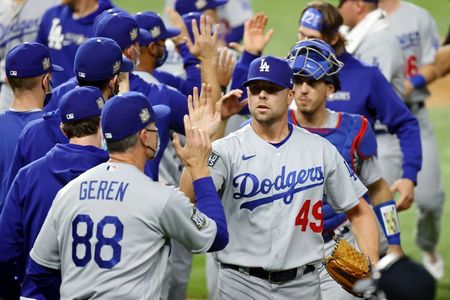 There will be no backing down from the Tampa Bay Rays in Game 6 of the World Series on Tuesday against the Los Angeles Dodgers, with their best pitcher on the mound and a relentless offense in tow.

The Rays’ assignment: stopping the Dodgers from winning their first World Series title in 32 years.

The determined Tampa Bay offense was held in check Sunday night as Los Angeles took a 3-2 lead in the best-of-seven series with a 4-2 victory, but it was not for a lack of inventive thinking.

Even in the Game 5 defeat, the Rays’ bold and brash offensive mindset was represented by an attempted straight steal of home by Manuel Margot. It failed, but just barely, as Dodgers first baseman Max Muncy alerted Clayton Kershaw and the pitcher’s snap throw home — as catcher Austin Barnes applied the tag — stood out as the contest’s turning point.

The bottom of the fourth inning was trending the Rays’ direction. Margot was on third base and Hunter Renfroe was on first with no outs and the Rays trailing 3-2. But Kershaw got Joey Wendle to pop up before striking out Willy Adames.

Instead of relying on a two-out hit from Kevin Kiermaier, Margot broke for home. Kershaw stepped off the rubber and got the ball to Barnes just in time.

Kershaw’s resolve only seemed to grow stronger. He retired the next five batters he faced before manager Dave Roberts went to the bullpen and Los Angeles shut down Tampa Bay from there.

The Rays will aim to extend their season one more day in Game 6 with left-hander Blake Snell on the mound. Snell was solid in the Rays’ 6-4 victory in Game 2. He gave up two runs on two hits in 4 2/3 innings, with four walks and nine strikeouts.

“(I’m) always confident in this bunch,” Kiermaier said. “If there’s any team that can respond well with their backs against the wall, our group is the group that has come through when we need it the most.”

Tampa Bay built a 5-0 lead for Snell in Game 2 as the offense got a jump on what was essentially a bullpen day for the Dodgers. Brandon Lowe emerged from a postseason slump with two home runs.

Dodgers right-hander Tony Gonsolin started Game 2 and went one inning on short rest. He will take the mound again in Game 6 in more of a traditional start, although he likely would have to be dominating in order to go five innings.

A bullpen-heavy game is not the Dodgers’ forte, although it did get them through Game 7 of the National League Championship Series against Atlanta. Gonsolin pitched two innings in that one but gave up two of the Braves’ three runs.

Now they are poised to win it all for the first time since 1988, back when Kirk Gibson’s walk-off home run in Game 1 set the tone for the Dodgers’ five-game victory over the Oakland Athletics.

The Dodgers have emerging ace Walker Buehler waiting to pitch on full rest in Game 7. Roberts said that Buehler, Kershaw and Julio Urias are the only pitchers not available for Game 6.

The Rays would counter with right-hander Charlie Morton if they can get to Game 7. Morton is 3-0 with a 0.61 ERA in three career Game 7 appearances, leading the Houston Astros past the New York Yankees in the 2017 American League Championship Series and the 2017 World Series against the Dodgers, then guiding the Rays past the Astros in the ALCS earlier this month.

For now, though, the Dodgers aren’t concerning themselves with a possible Game 7.

“It’s human nature, but I just don’t really let my mind go there,” Roberts said Monday. “As (Monday) goes on I will start thinking about Game 6 and really that’s all I’m thinking about.”