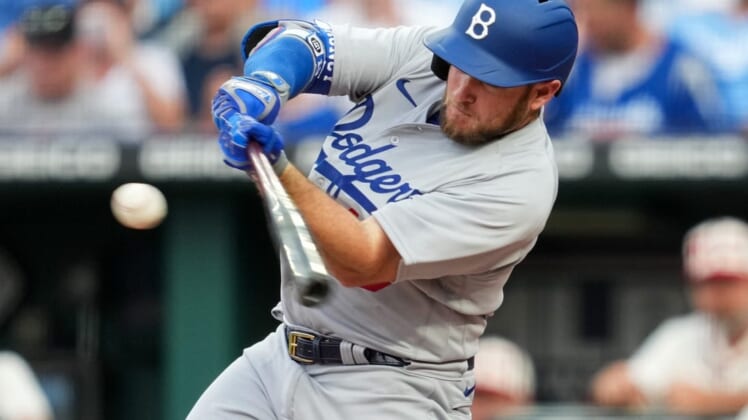 Max Muncy went 4-for-5 with a homer, a double and four RBIs as the visiting Los Angeles Dodgers defeated the Kansas City Royals 13-3 on Saturday night for their 12th consecutive victory.

The Dodgers have outscored their opponents 91-31 during their winning streak.

Dodgers starter Andrew Heaney, who has logged two stints this year on the injured list due to left shoulder problems, took a 107 mph line drive off his left arm in the third.

The ball struck by Bobby Witt Jr. went for a one-out hit. Heaney struck out the next two batters to finish the inning but didn’t come out for the fourth. He gave up two runs on three hits and no walks while fanning five.

Royals starter Brad Keller (6-13) gave up a career-high-tying eight runs for the second time in three starts. He allowed nine hits and three walks while striking out three in three innings.

Betts hit his 35th career leadoff home run in the first. Keller then gave up a single to Trae Turner and walked Freddie Freeman and Smith. Muncy, Justin Turner and Gavin Lux all singled in runs to make it 4-0 before Keller recorded an out.

A wild pitch plated the fifth run before Brent Rooker threw out Justin Turner trying to score on a flyout to left field.

Betts led off the second with a single and came around to score on Smith’s home run, a 423-foot shot over the bullpen in left.

Michael Massey hit a two-out, two-run triple in the second for the Royals.

Lux hit a solo home run in the third.

Muncy’s two-run shot in the fourth was the Dodgers’ fourth long ball of the game.

Muncy and Rooker each hit an RBI double in the sixth.

Gallo and Bellinger homered off Royals infielder Nicky Lopez in the ninth. The six homers were a season high for Los Angeles.