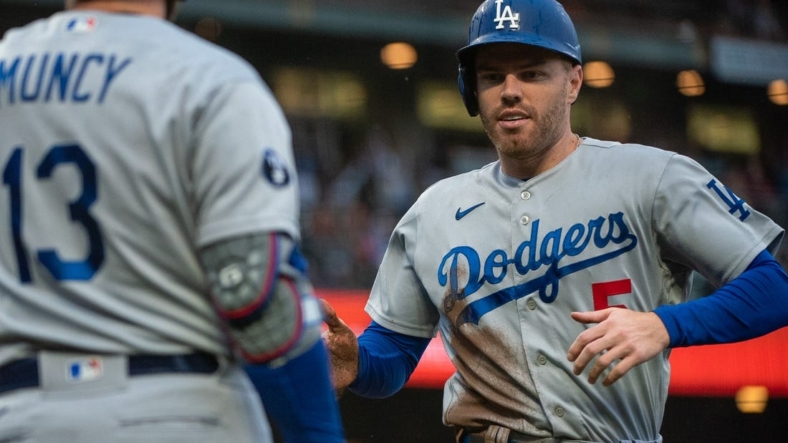 Mookie Betts ignited a two-run 10th inning with an RBI double and the visiting Los Angeles Dodgers completed a season-series demolition of the San Francisco Giants with a 4-3 victory in a rain-delayed game Sunday night.

Andrew Heaney threw four shutout innings sandwiching a 20-minute delay and Justin Bruihl stranded the bases loaded in the last of the 10th for his first career save, sending the Dodgers (101-44) to a 3-0 series sweep and a 15th win in 19 meetings with the defending National League champions.

After the Giants (69-77) had tied the score 2-2 in the eighth, Austin Barnes sacrificed automatic runner Cody Bellinger to third leading off the 10th before Betts lashed a double down the left-field line against the fifth San Francisco pitcher, John Brebbia (6-2).

The Giants got back within a run when Wilmer Flores singled in automatic runner Heliot Ramos with one out in the last of the 10th, and San Francisco later loaded the bases with two outs against Andre Jackson.

But Bruihl came on to retire LaMonte Wade Jr. on a full count for just the Dodgers’ fifth win in 13 extra-inning affairs this season.

Seeking to salvage a split in a six-game homestand against the Atlanta Braves and Dodgers, the Giants rallied from 1-0 and 2-1 deficits, drawing even at 2-2 in the eighth on a two-out, ground-rule double off the bat of J.D. Davis.

The blast to center field scored Ramos, with Thairo Estrada right behind him until forced to go back to third because Davis’ hit one-hopped the wall, denying the Giants a possible lead.

After getting shut out on two hits in four innings by Heaney, the Giants put up their other run in the fifth on a two-out throwing error by shortstop Trea Turner, which allowed Lewis Brinson to score from third.

Heaney struck out eight and walked one in his 12-out stint.

The Dodgers took their one-run leads on an RBI double by Justin Turner in the fourth, scoring Freeman, and an RBI single by Freeman in the sixth that plated Trea Turner, who had doubled.

Giants starter Alex Cobb was charged with both Dodgers regulation runs on four hits in 5 1/3 innings. He walked three and struck out three.

Flores finished with two hits for the Giants, who went just 2-for-13 with runners in scoring position.