Dodgers’ Dustin May to face Marlins in season debut 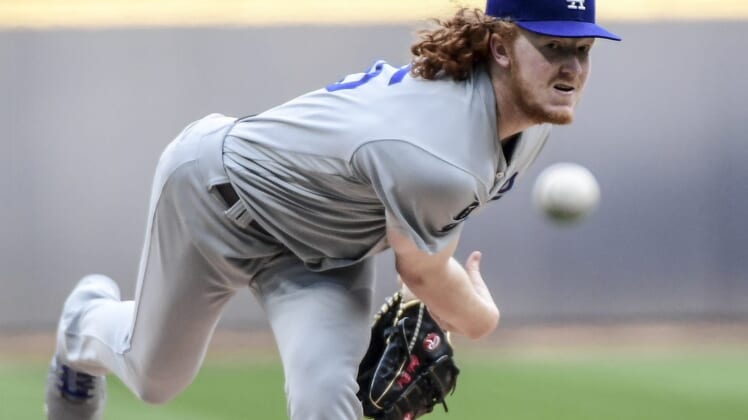 Less than a week after getting the news they were dreading, the Los Angeles Dodgers suddenly are far more optimistic about their starting rotation.

After Walker Buehler was ruled out for the rest of the season due to elbow surgery, the Dodgers will welcome fellow right-hander Dustin May back to the rotation in Saturday’s game against the visiting Miami Marlins.

May underwent his own elbow procedure, having Tommy John surgery in the early part of the 2021 season. The 24-year-old was a rising star, proving to be a key component to the team’s 2020 World Series title run.

Now he returns to a team making another playoff run, while holding a huge lead in the National League West with seven weeks remaining in the regular season.

“Looking at where we are in the standings, (we don’t have) to lean on him,” Dodgers manager Dave Roberts said. “We’ll make sure that No. 1, he continues to build up and stay strong and healthy. And No. 2, with that, we expect the performance to be there.”

May, on the other hand, said he is excited for a chance to pitch in some meaningful games. And he is eager to debut a new changeup as well.

“I started tinkering with it when I was able to start spinning stuff (during rehab),” May said on Spectrum SportsNet LA. “I’m the most confident that I have ever been with a changeup at the moment so I’m going to try to build on that and move forward with it.”

The Marlins will counter with left-hander Braxton Garrett (2-6, 3.67 ERA), who has lost his past three decisions but went six scoreless innings in a no-decision against the Atlanta Braves on Sunday. He will be facing the Dodgers for the second time after giving up three runs in three innings of a relief outing last season at Dodger Stadium.

“Like I’ve (said) a few times, I’m start to start; I always feel my back’s against the wall,” Garrett said. “It’s just how I’ve been my whole career. So just taking it day by day, trying to get better and what we do as a team is what we do. I’m going to continue to support us and try to be the best pitcher I can.”

Garrett will be facing a Dodgers offense that is in a bit of a lull. Los Angeles has scored just 15 total runs over its past six games but still managed to earn a 2-1 victory Friday against the Marlins.

It was something of a gift victory for Los Angeles, which saw Mookie Betts score the go-ahead run in the eighth inning when catcher Jacob Stallings abandoned home plate after a ground ball to third base.

Trayce Thompson drove in a run for Los Angeles and made a leaping catch up against the wall in the ninth inning on a drive by the Marlins’ Nick Fortes. With Dodgers closer Craig Kimbrel continuing to struggle, right-hander Evan Phillips pitched the ninth inning for his second save.