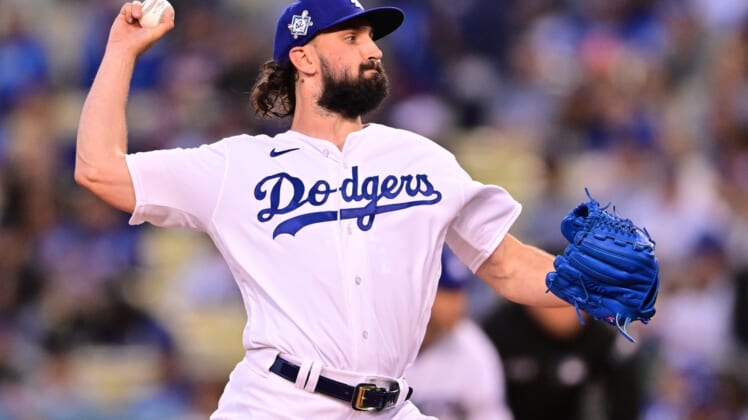 Gavin Lux singled, tripled and scored twice in his return to the lineup as the Los Angeles Dodgers extended their winning streak to four games with a 3-1 victory over the visiting Cincinnati Reds on Friday.

Tony Gonsolin pitched four scoreless innings and Trea Turner had two hits, including an RBI triple for Los Angeles, who won on Jackie Robinson Day. MLB held a league-wide celebration on Friday to remember the former Dodgers standout who became the majors’ first Black player 75 years ago to the day.

Jackie Robinson’s widow, 99-year-old Rachel Robinson, was honored on the field before the game.

Turner extended his hitting streak to 26 games going back to last season, the third longest in the club’s Los Angeles history.

Former Dodger Kyle Farmer had two hits and drove in a run for the Reds, who took their fourth straight loss. Cincinnati starter Vladimir Guerrero (0-2) gave up three runs on five hits over four-plus innings with three walks and three strikeouts.

The Dodgers took a 1-0 lead in the second inning. A two-out single by Chris Taylor scored Max Muncy, who had led off the inning with a double.

Lux singled to open off the third inning in his first at-bat after not starting Thursday, his first game not in the lineup. He stole second base, went to third on a Freddie Freeman groundout and scored on Turner’s triple.

Los Angeles loaded the bases with no outs in the fifth when Lux tripled, Mookie Betts was hit by a pitch and Freeman walked. Trea Turner struck out and Muncy flied out before Justin Turner walked against reliever Jeff Hoffman to force home the only run in the inning.

Farmer got the Reds on the scoreboard in the sixth inning with an RBI single off Tyler Anderson (1-0). It was the lone run Anderson gave up in four innings. He allowed two hits with no walks and four strikeouts.

New Dodgers closer Craig Kimbrel picked up his second save in two chances with a perfect ninth inning.