“They’re both ready to go,” Roberts said before Thursday’s game against the Arizona Diamondbacks. “They’re both bored with the rehab and want to get out there and play. We’ll see how it goes. Seeing how they recover being on their feet. We’ll read and react then.”

Bellinger, 25, has been out since April 5, when he suffered a hairline fracture in his left leg during in the Dodgers’ 10-3 win over the Oakland Athletics. 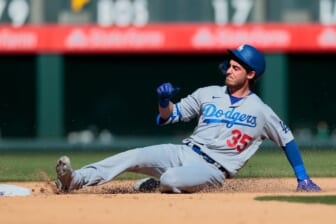 McKinstry, 26, last appeared in a game in the Dodgers’ 1-0 victory at the Seattle Mariners on April 20, when he suffered a right oblique strain.

A rookie who played seven games for Los Angeles in 2020, McKinstry was hitting .296 with three home runs and 14 RBIs in 17 games with the Dodgers this year.