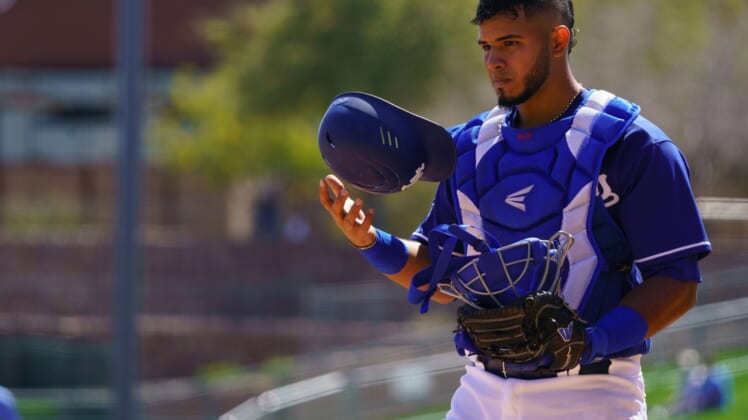 Los Angeles Dodgers prized catching prospect Keibert Ruiz will not open the season at Triple-A Oklahoma City as expected, getting called up to the major league team instead in advance of Tuesday’s doubleheader against the Chicago Cubs.

Ruiz was not the additional player for the doubleheader, but instead was added to the regular roster after left-hander Mike Kickham was designated for assignment Monday.

Ruiz, 22, entered the season as the No. 48 overall prospect in MLB, according to mlb.com. Oklahoma City was set to begin its season Tuesday.

The Dodgers are strong at the catching position with both Will Smith and Austin Barnes, but the move to three catchers will actually give the Dodgers more options. Barnes was used at second base both Saturday and Sunday at Milwaukee and his versatility can be explored further with Ruiz on the roster.

Ruiz spent most of the 2020 season at the Dodgers’ alternate training site, but he did appear in two major league games last season, hitting a home run among his two hits in eight at-bats. He batted a combined .316 at two Single-A levels in 2017, hit 12 home runs at Double-A in 2018, and hit .261 with six home runs in Double-A and Triple-A combined in 2019.