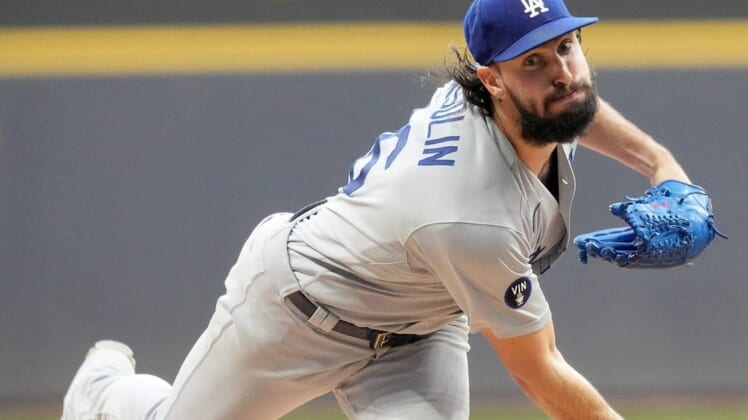 The National League ERA leader will take the mound on Tuesday night, and that pitcher — Los Angeles Dodgers right-hander Tony Gonsolin — has his team’s offense to thank for the lofty perch.

Nobody in the NL has a better ERA than Gonsolin’s 2.12 mark, and while he gets all the credit for keeping the number that low, he wasn’t leading the league entering last weekend. However, when the Dodgers lit up the Miami Marlins’ Sandy Alcantara on Sunday, it was Gonsolin who moved atop the ERA pile.

Gonsolin (15-1) will look to maintain his stellar form when he opposes reigning NL Cy Young Award winner Corbin Burnes (9-5, 2.48) and the visiting Milwaukee Brewers on Tuesday.

Gonsolin was an All-Star for the first time this season, but the showcase game in July actually was a bittersweet moment for him. He was called on to pitch the fourth inning for the NL and allowed back-to-back home runs to Giancarlo Stanton and Byron Buxton, blows that were the difference in the American League’s 3-2 victory.

Otherwise, 2022 has been a dream for Gonsolin, who has rebounded from a bumpy July to go 3-0 with a 0.48 ERA in three August starts (18 2/3 innings). The 28-year-old enters off a dominating outing on Wednesday at Milwaukee, where he gave up just two hits over seven scoreless innings in the Dodgers’ 2-1 victory.

It was his first career appearance against the Brewers.

“They do a great job of game-planning,” Dodgers manager Dave Roberts said. “Kind of what they do is prevent runs, they match up, they’ve got good arms. You combine that with the talent they have, they’ve done a good job.

“They caught the ball, they play good defense. … You expect to play close ballgames against those guys.”

Los Angeles’ Max Muncy did his part, going 1-for-2 on Monday with two walks not long after it was announced he had agreed to a $13.5 million contract for next season with a club option for 2024. Muncy has seven home runs and 15 RBIs in 17 games this month.

Getting through the Brewers on Tuesday will come with the added challenge of facing off against Burnes.

Both Gonsolin and Burnes are the pride of Saint Mary’s College in Moraga, Calif., and the two were teammates for three seasons from 2014-16.

Burnes faced the Dodgers on Thursday at Milwaukee, giving up three runs on six hits over 5 2/3 innings while earning the victory in a 5-3 Brewers win. That decision earned Milwaukee a split of the four-game series.

Now Burnes can help the Brewers finish a series victory over the Dodgers after Milwaukee blanked the Dodgers on Monday on five scoreless innings from Eric Lauer and four more zeros from the bullpen. In five career outings (three starts) against the Dodgers, Burnes is 2-1 with an 8.16 ERA.

On Monday, the Brewers even were able to stay away from left-handed reliever Taylor Rogers, who is 0-1 with one save and a 5.63 ERA in eight outings since joining the club. Rogers arrived in the trade-deadline deal that sent closer Josh Hader to the San Diego Padres.

“He’s pitched a lot here, and I believe it was six out of nine (days before Monday) for him,” Brewers manager Craig Counsell said of Rogers. “But I think he’s pitched really well. … It feels like from a need perspective, he’s in a really good place.”