Los Angeles scored early and often and ace Walker Buehler overpowered the Tampa Bay Rays as the Dodgers bounced back from their Game 2 loss... 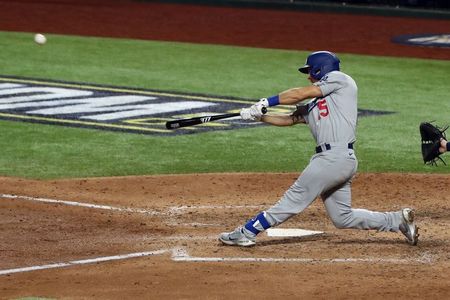 (Reuters) – Los Angeles scored early and often and ace Walker Buehler overpowered the Tampa Bay Rays as the Dodgers bounced back from their Game 2 loss with a 6-2 victory to take a 2-1 lead in the World Series on Friday.

The favored Dodgers wasted no time getting on the board when third baseman Justin Turner rifled a solo home run over the left field fence in the first inning.

The Dodgers, playing as the “away” team for the first time in a series being held at Globe Life Field in Texas due to the COVID-19 pandemic, scored two more runs when Max Muncy singled in the third to push the lead to 3-0.

The Dodgers plated another run in the fourth on a sacrifice safety squeeze by Austin Barnes before Mookie Betts brought Joc Pederson home on a single to center for 5-0.

Buehler was sharp from the outset and took a no-hitter into the fifth inning before giving up a double to Manuel Margot, who scored on a double by Willy Adames for 5-1.

But the Dodgers got the run back in the sixth on a solo shot by catcher Barnes, who also anchored an outstanding defensive effort by the team.

Buehler, who would be the likely Game 7 starter if the best-of-seven series goes the distance, said he is battle-tested and ready to help his team win its first title in 32 years.

“I feel like I’ve failed in these moments, but I’ve taken the failures and I’ve tried to learn from them,” he said.

“I felt good out there and my team gave me a cushion early. You can’t ask for more than that.”

Turner, who went 2-for-5 while making some outstanding defensive plays, said he was finally feeling like himself at the plate.

“This postseason hasn’t been that great for me personally,” he said.

“But I’ve been grinding away and working with our hitting guys and finally felt a little better tonight. I was able to put together five good at-bats.”

One bright spot for the Rays was a home run in the bottom of the ninth by slugger Randy Arozarena, who had just one hit in the first two games.

With his two-out blast to left, the 25-year-old rookie from Cuba tied the all-time postseason home run record at eight.

The Rays will hope to build on that momentum when the series continues with Game 4 on Saturday.