The Los Angeles Dodgers head into this year's World Series looking to end an agonizing 32-year wait for a championship... 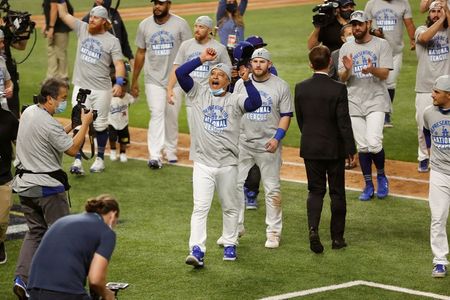 The Dodgers, making their third World Series appearance in four years, will face the Tampa Bay Rays when the best-of-seven final begins on Tuesday as Major League Baseball’s shortened season, delayed by COVID-19, comes to a close.

Despite a tough opponent still standing between them and an elusive championship, Dodgers manager Dave Roberts made a bold declaration after his squad reached the World Series.

“This year is our year,” said Roberts.

The Dodgers, one of baseball’s oldest teams, had the best record during the regular season yet were facing another frustrating early playoff exit when they fell behind 3-1 to Atlanta in the best-of-seven National League Championship Series.

But the Dodgers rose to the occasion in three consecutive elimination games, including the Game Seven decider in which Cody Bellinger hit what proved to be the game-winning home run in the seventh inning.

“It was time to get it done. By then, we had nothing to lose – they have something to lose, they shouldn’t lose this series. We took it one inning at a time and were able to pull it off.

The Dodgers, who have a complete lineup featuring solid hitting, pitching, defense and experience, are heavily favored in the World Series which, because of COVID-19, will be held entirely in Arlington, Texas, with a limited number of fans.

With outfielder Mookie Betts, who made a number of momentum-swinging catches in the NLCS, and a solid rotation headed by three-time Cy Young Award winner Clayton Kershaw, the Dodgers may finally be ready to break through.

They last won a World Series in 1988, defeating the Oakland A’s in five games.

(Reporting by Frank Pingue in Toronto; Editing by Matthew Lewis)