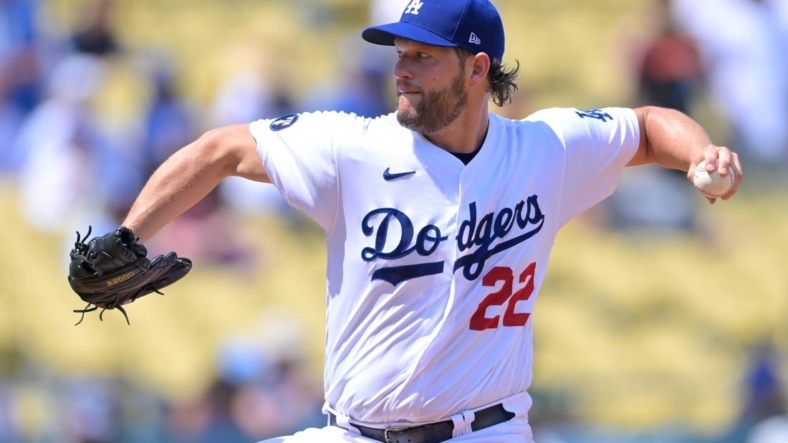 The veteran left-hander, who will start against the Arizona Diamondbacks in Phoenix, looked back at the famous pool takeover in 2013 with Los Angeles currently the verge of securing its ninth division title in 10 seasons.

The Dodgers created quite a ruckus when they stormed the pool beyond the fence in right-center after clinching the ’13 division crown. Players jumped or dove in, some doing cannonballs, and splashed water and had a grand time celebrating in the Diamondbacks’ pool.

When the Dodgers notched the deciding victory in the NL Division Series over Arizona in 2017, there were mounted police on the warning track to prevent another invasion of the pool.

“Are we jumping in the pool? Probably not if it’s going to cause that much trouble,” Kershaw told the Orange County Register. “Unless they tell us not to do it. If we’re not going to jump in the pool, I don’t care. It’s just funny to me that they care so much.”

The magic number to clinch the division is one for the Dodgers (97-43) entering the Tuesday game.

“It’s always exciting and we never take it for granted,” Los Angeles center fielder Cody Bellinger said on Monday after the Dodgers beat the Diamondbacks 6-0. “There’s a lot of hard work and dedication put into that, so if we win, we’re going to enjoy it.”

Bellinger had a key two-run double as Los Angeles officially clinched a postseason berth with the Monday win in the opener of the three-game series. It marked the second straight day the Dodgers left the field thinking they had punched their ticket.

However, instead of clinching with an 11-2 win over the San Diego Padres on Sunday, the Dodgers needed one more win as Major League Baseball acknowledged Monday that it overlooked a three-way tiebreaker scenario that would have left Los Angeles on the outside of the playoff picture.

Kershaw, the last remaining Dodger from the 2013 squad, will be matched up against Arizona right-hander Merrill Kelly (12-5, 2.94 ERA) when Los Angeles attempts to improve to 11-2 this season against the Diamondbacks (66-74).

Kershaw (7-3, 2.62 ERA) will be making his third start since returning from lower-back issues. The 34-year-old veteran allowed a combined three runs and six hits over 11 innings in no-decisions against the New York Mets on Sept. 1 and the San Francisco Giants on Sept. 7.

Kelly is unbeaten in his past 13 starts, recording six victories during the stretch. He has given up two or fewer runs nine times in that span.

Kelly received a no-decision against the Padres in his latest start, on Sept. 6. He allowed just three hits in seven innings, but they were all homers as he gave up four runs.

Betts extended his career-best homer count to 34 with a three-run blast in the ninth inning on Monday.