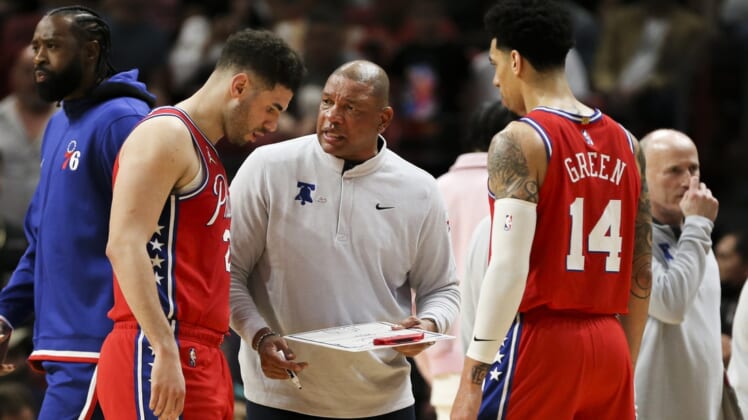 The three-day Doc Rivers homecoming in Los Angeles will come to an end Friday night when the veteran coach leads his current team — the Philadelphia 76ers — against one of his former teams as the 76ers visit the Clippers.

The 60-year-old Rivers is the winningest coach in Clippers history, having gone 356-208 in seven seasons from 2014-20. Los Angeles made the playoffs in six of those years, advancing to the second round three times.

The Clippers (36-38) advanced to the conference finals in 2020-21 — their first with Tyronn Lue at the helm. They currently find themselves eighth in the West, closing in on clinching a spot in the play-in tournament and a possible fourth straight trip to the playoffs.

By contrast, Los Angeles had made the playoffs just three times in 16 seasons before hiring Rivers.

“That’s something that I will always be proud of,” he said this week. “The Clippers now are in the NBA, and I feel like I played a major part in that.”

The NBA was nice enough to schedule both 76ers games in Los Angeles this season consecutively, even putting a night off in between to allow Rivers, who also played a season for the Clippers in 1991-92, a chance to get wined and dined in his old stomping grounds.

Rivers led the Sixers to a 126-121 victory over the Los Angeles Lakers in the Crypto.com Arena on Wednesday, with Joel Embiid (30) and James Harden (24) combining for 54 points in the victory.

The win allowed the 76ers (45-27) to temporarily move into a virutal tie for second place with the Milwaukee Bucks and Boston Celtics in the Eastern Conference standings — all 1.5 games back of the Miami Heat.

The victory over the Lakers, which included 21 points from Tyrese Maxey and 20 from Tobias Harris in a balanced attack, was Philadelphia’s fourth in its past five games.

After completing a season-series sweep of the Lakers, the 76ers will attempt to avoid getting swept by the Clippers, who prevailed 102-101 in Philadelphia in January. The 76ers blew a 24-point, second-half lead in that one, then lost on a pair of Reggie Jackson free throws with 18 seconds left.

That was before the Harden addition at the trade deadline. He had 39 points, 15 assists and eight rebounds against the Clippers in a December appearance in Los Angeles as a member of the Brooklyn Nets.

The Clippers, meanwhile, will be looking to snap a four-game losing streak at their old coach’s expense. The Clippers are coming off a winless two-game trip in which they were drubbed by 29 by the Utah Jazz and 12 by the Denver Nuggets.

Rebounding from adversity has been a Clippers strength under Lue. The 24-point comeback at Philadelphia earlier this season was just one example.