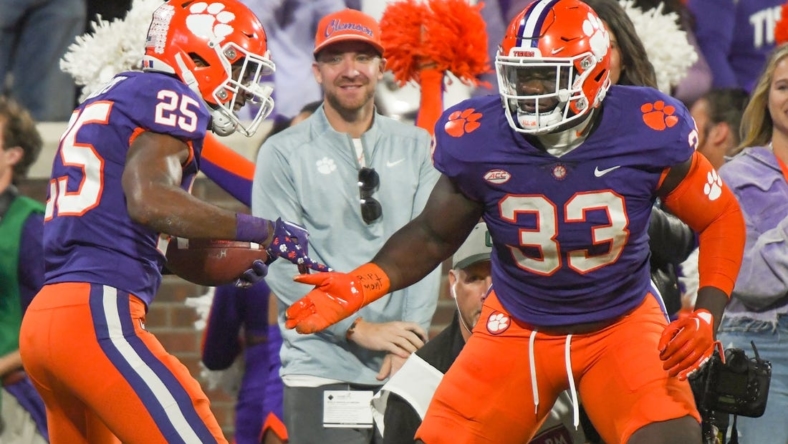 DJ Uiagalelei threw for a touchdown and ran for another to help No. 10 Clemson record a 31-16 victory over visiting Louisville on Saturday.

The Tigers (9-1, 7-0 Atlantic Coast Conference) won their 39th consecutive game at home and locked up a spot in the ACC championship game.

Uiagalelei completed 19 of 27 passes for 185 yards and connected with Antonio Williams for his lone touchdown strike in the second quarter. Williams caught 10 passes for 83 yards.

Phil Mafah rushed for 106 yards on 10 carries and Will Shipley Jr. had 97 yards on 19 totes for Clemson.

But that loss didn’t hurt as much as the one the Cardinals endured just before halftime when starting quarterback Malik Cunningham exited the game with an apparent shoulder injury.

Cunningham, who already entered Saturday’s game with an injured left hand, went down after a 26-yard run to end the first half. Cunningham suffered the hand injury last week in Louisville’s win over James Madison and had his hand taped up.

Brock Domann entered in the second half and completed 13 for 23 passes for 175 yards and a touchdown on the game’s final play to Braden Smith from 31 yards out. But Domann was intercepted once by Barrett Carter and could only muster one field goal drive before Clemson put it out of reach.

Louisville gained possession with just under four minutes left after a Shipley fumble but was stopped on downs.

Mafah put the game away with a 39-yard touchdown run with 2:13 to play in the fourth quarter.

Louisville kept itself in the game thanks to three Clemson fumbles but yielded 439 total yards to the Tigers offense.