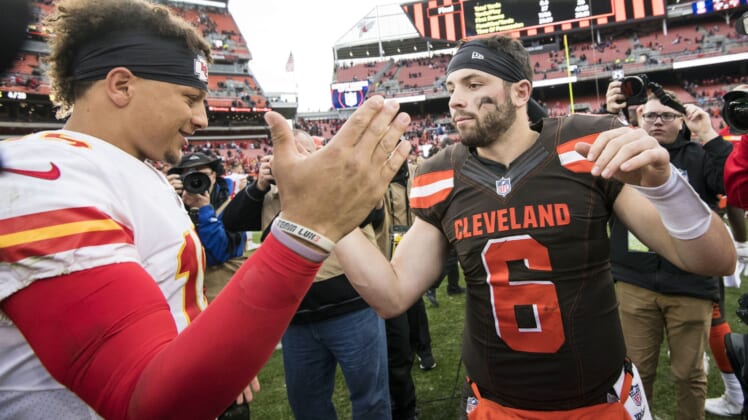 The divisional round has arrived and we couldn’t ask for a better slate of games to enjoy this weekend. Between a final clash between two future Hall of Fame quarterbacks, a matchup of the NFL’s best defense vs. the No. 1 offense and plenty of new blood, this year’s playoffs is filled with excitement.

With a trip to the NFC Championship Game at stake, the Green Bay Packers will welcome the Los Angeles Rams to Lambeau Field. While the Packers certainly have home-field advantage, thanks to the blistering cold, defense matters this time of year. Green Bay enters as the clear favorite, but the upset potential is real. Meanwhile, in Buffalo, a matchup between reigning NFL MVP Lamar Jackson and breakout sensation Josh Allen. Snow is in the forecast and an epic game could spark a new AFC rivalry.

On Sunday, it all starts in Kansas City. The Chiefs are everyone’s pick to reach Super Bowl LV and might be on the verge of the NFL’s next dynasty. But Cleveland seems to have destiny on its side this year, with a run game capable of carrying this team far. To cap off the action, we’ll get Drew Brees and Tom Brady in a battle for the ages. Both iconic quarterbacks will be playing with legacies on the line, which creates exciting possibilities for this game.

The possibilities for this weekend’s slate of games are endless. Let’s dive into our bold predictions for each of the divisional round games.

NFL playoffs: Schedule and game-by-game predictions for NFL Divisional Round

Everyone in Cleveland is exciting coming off a thrilling victory over the Pittsburgh Steelers. The Browns overcame adversity in that matchup, missing key players and coaches due to COVID-19. Everyone will be back for Sunday’s game, which leaves fans and players feeling confident. Unfortunately for Cleveland, it runs into the buzzsaw that is the Kansas City Chiefs.

Andy Reid is practically unbeatable coming off a bye week and Patrick Mahomes has prepared for this game for three weeks. Plus, with Aaron Rodgers expected to win NFL MVP, Kansas City’s quarterback will use that as motivation. It’s all very bad news for Cleveland. Consider this defense needed Ben Roethlisberger and his receivers’ hands to gift them four interceptions and a defensive touchdown, but he still finished with 501 passing yards and four scores. Imagine what the most talented quarterback in NFL history, with future Hall of Famers Travis Kelce and Tyreek Hill and play-caller Andy Reid, will do to the Browns’ secondary.

Cleveland doesn’t have enough of a pass rush to make life difficult for Mahomes and blitzing him will immediately backfire. If the Chiefs get the ball first and jump out to an early lead, forcing Cleveland to rely on its passing attack, this will be a blowout. That’s what we expect to happen, leading to five touchdowns from Mahomes and a three-score victory.

While Sean McVay hasn’t officially named his starting quarterback yet, everyone expects Jared Goff under center for Saturday’s game. He handled himself fairly well coming off the bench, throwing with a broken thumb. It was a respectable effort, but he still finished completing just 9-of-19 attempts for 155 yards and his defense did the heavy lifting. Now, still playing with pins in his thumb, Goff will be playing in sub-30 degree weather.

Bone-chilling cold, especially for a California native, is the last thing the Rams need. It will significantly impact the Rams’ offense, with Green Bay stacking the box. Keep in mind, this isn’t the same defense that Raheem Mostert gashed for 220 yards in the NFC Championship Game. With run-stuffer Damon Harrison and Pro Bowl defensive tackle Kenny Clark on the inside, plus improved play at linebacker, the Packers are handling the run much better as of late. They can take the same approach used against the Tennessee Titans and Chicago Bears, forcing Goff to beat them.

If that happens, Los Angeles is in trouble. While its running game should be effective, setting up a few field goals and finding the end zone, it likely won’t be enough. Goff doesn’t handle pressure well and the circumstances in this game are terrible for him. It wouldn’t be a surprise if he throws a pick-six, perhaps to Darnell Savage or Jaire Alexander, and gets held out of the end zone.

There’s a reason the NFL saved this divisional round game for Sunday night on FOX. While Tom Brady will return for the 2021 NFL season, everything indicates Drew Brees will hang up his cleats after the playoffs. So, two legendary quarterbacks with their names atop numerous NFL records will face off in one final matchup. There have been so many storied battles between these two, but Sunday will be their first against one another in the playoffs.

Tampa Bay’s defense carries a reputation for being one of the best in the NFL. Frankly, that’s not a standard we’ve seen in recent weeks. From Week 9 to Wild Card Weekend, opposing quarterbacks are averaging 264 passing yards per game with a 71.7% completion rate and 104.2 quarterback rating against the Buccaneers. Just look at what Taylor Heinicke did to this secondary. On the other side, the Saints boast an outstanding defense. But Brady is the greatest quarterback in NFL history for a reason. With a 126.9 quarterback rating and 12/1 TD/INT ratio over his last four contests, plus his resume in the playoffs, we expect him to shine.

It all sets up for an epic shootout between these two NFC South rivals. Frankly, both rushing attacks figure to be afterthoughts in this game. With that in mind, both Brady and Brees throwing five touchdown passes is possible. If that happens, victory could be decided by quarterback who has the football in his hands on the final drive.

In 2013, Colin Kaepernick devastated Green Bay’s defense with a record-setting 181 rushing yards in the NFL Divisional Round. It was the best rushing performance by a quarterback in playoff history, even ranking 18th for the single-game mark among all players. Many have expected that mark to stand atop the record books for another decade-plus, but we think it will be broken on Saturday night.

While Buffalo’s defense held Lamar Jackson to 40 rushing yards in their 2019 meeting, this unit took a step back in 2020. Just consider they only registered one quarterback hit and failed to record a sack against Philip Rivers on Wild Card Weekend. An inability to even put a hand on Jackson will cause major problems for the Bills. Plus, if it’s snowing, Jackson will be even more tempted to run the football. We expect the Ravens’ offense to overwhelm the Bills on the ground, with Jackson leading the way as he rushes into the NFL’s record books.

Baker Mayfield silenced awaiting critics who expected the Browns to crumble against the Steelers. Instead of collapsing under the pressure, the 25-year-old delivered three touchdowns and 263 passing yards in his playoff debut. With that said, it also came in a game that saw takeaways and his running backs do a lot of heavy lifting.

If Sunday’s clash against the Chiefs turns into a shootout, it will be another pivotal moment in Mayfield’s NFL career. If he proves he can hang around in a high-scoring game with the best player, that changes everything. He could enter the offseason, entering the fourth year of his rookie contract, and set his asking price on an extension. The Browns won’t have a problem paying him either, given he proved he could compete with the best.

But there’s a downside if Mayfield comes up short in this game. Losing in a blowout, with the Browns’ passing game unable to keep pace with the Chiefs, creates more questions about Mayfield’s future. Many will start to question if he is a product of Kevin Stefanski’s system and puts a ceiling on the Browns’ championship potential. If that happens, Mayfield might have to play out his contract with the hopes of proving himself. Then again, these are the kinds of situations he lives for.