Division-leading Falcons confident with Chargers next 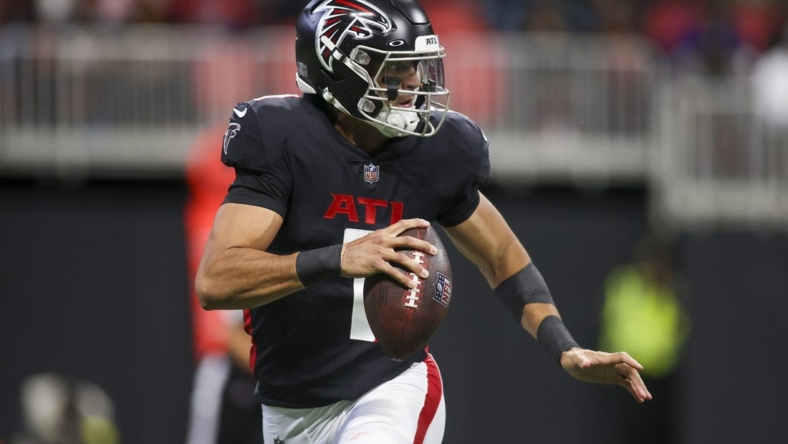 Despite a break-even record and being down their top offensive performer as of late, the Atlanta Falcons will be in first place in their division when they take the field at home Sunday against the Los Angeles Chargers.

The Falcons (4-4) stayed atop the NFC South after a wild 37-34 victory at home over the Carolina Panthers last week. The Falcons could have lost twice in the latter stages had it not been for a pair of missed kicks.

Atlanta looked doomed when Carolina’s D.J. Moore hauled in a 62-yard touchdown pass from P.J. Walker to tie the game with 12 seconds remaining. The Panthers only needed an Eddy Pineiro extra point to take the lead, but Moore received an unsportsmanlike penalty for ripping off his own helmet in celebration.

The 15-yard penalty forced Pineiro into a 48-yard PAT and he missed wide left. Pineiro later missed a 32-yard attempt in overtime. The Falcons finally won on a 41-yard boot from Younghoe Koo that improved their home record to 3-1.

The Falcons, who have been playing the last four weeks without running back Cordarrelle Patterson, sit alone atop the NFC South.

“No matter what, guys understand that it’s not going to be perfect in every phase of the game, but one side will pick up the other,” Falcons quarterback Marcus Mariota said. “As long as we’ve got that, we’ll continue to be in these games, and I think we’ll win more games than not.”

It has been a busy week for the Falcons. Patterson returned to practice Wednesday after a knee procedure, yet it remains undecided if he will play Sunday. Guard Elijah Wilkinson (knee) missed practice.

Also this week, the Falcons traded suspended wide receiver Calvin Ridley to the Jaguars, sent safety Dean Marlowe to the Bills for a draft pick and acquired cornerback Rashad Fenton from the Chiefs.

The Chargers hope to welcome some additions this week, but in the form of players returning from injury. Wide receiver Joshua Palmer and tight end Donald Parham Jr. were full participants in practice after recent concussions. But wide receivers Keenan Allen (hamstring) and Mike Williams (ankle) remained out of practice.

Despite some obvious needs, the Chargers were not active at Tuesday’s trade deadline. They do have all of their draft picks for next year, though, and a nice salary-cap situation.

“We want to make sure we have both of those things as healthy as we possibly can while making sure we’re in the mix and can compete with the rest of the league,” head coach Brandon Staley said. “I feel like we’ve done that. I like where our football team is at. I know the second half of the season we can bring it all together.”

The Chargers (4-3) are coming off a much-needed bye week but still are smarting from a 37-23 home loss to the Seattle Seahawks in Week 7.

While the Chargers have one of the more feared passing attacks, they have struggled on defense and might be even worse with their own rushing attack.

Behind quarterback Justin Herbert, Los Angeles is fourth in the NFL with 279.4 passing yards per game. But the running game is near the bottom of the league at 88.9 yards per game.

On defense, the Chargers are next-to-last with 27 points allowed per game and near the bottom with 137.6 rushing yards allowed. Another sign of their mediocrity: They are 4-1 against teams with losing records and 0-2 against above .500 opponents.

The Chargers could use some momentum with games against the San Francisco 49ers and Kansas City Chiefs ahead.