Discipline key as Roughriders get another shot at Blue Bombers 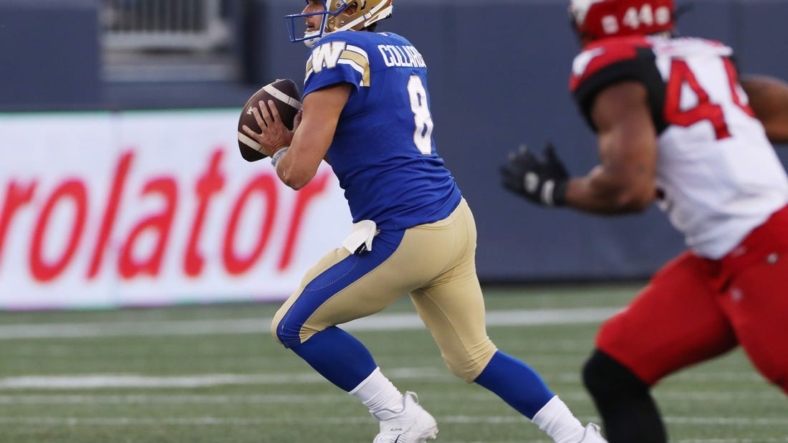 After their annual Canadian Football League matchup on Labor Day in Regina, Saskatchewan, the Saskatchewan Roughriders and host Winnipeg Blue Bombers will meet for the second time in a week Saturday.

The West Division-leading Blue Bombers (11-1) rallied from an early 14-point deficit last Sunday to win 20-18 and clinch a playoff berth.

Zach Collaros completed 15 of 24 passes for 214 yards and two touchdowns for Winnipeg and Marc Liegghio kicked a pair of field goals, including a go-ahead 55-yarder with 3:20 left in the fourth quarter.

Cody Fajardo was 23 of 32 for 292 yards and an interception for the Roughriders (6-6), who are in fourth place in the West. Teammate Frankie Hickson rushed 15 times for a game-high 85 yards.

But the Roughriders were penalized 11 times for 99 yards, while the Blue Bombers were pushed back just 40 yards on six flags.

“It’s a pillar of what we preach,” Blue Bombers offensive lineman Pat Neufeld said. “When you’re playing behind the (yardage) sticks consistently, you’re just always trying to dig yourself out of holes. You give yourself a better chance when you eliminate penalties.”

One of the flags against Saskatchewan was for objectionable conduct against injured receiver Duke Williams, who wasn’t dressed for the game but got into a scuffle with Blue Bombers defensive back Deatrick Nichols after he made a tackle near where Roughriders players were standing on the sideline.

That fourth-quarter penalty proved costly as it knocked Saskatchewan out of field-goal range.

“I talked with the guys about mental toughness being the ability to handle things that maybe aren’t so great with energy and good enthusiasm,” Roughriders coach Craig Dickenson said.

The Roughriders released controversial defensive tackle Garrett Marino this week, as he likely faced another league fine for a late hit on Collaros last Sunday. Marino was previously suspended four games by the CFL for his actions during a July 8 victory against Ottawa and was fined for a late hit in a loss to B.C. on Aug. 19.