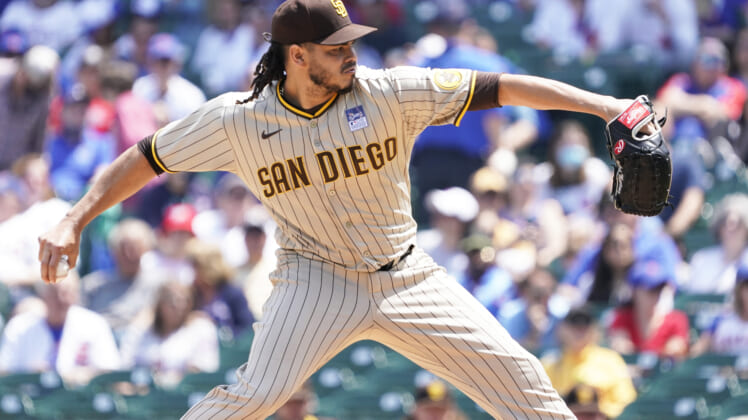 According to The Athletic’s Dennis Lin, the San Diego Padres have discussed trading right-handed pitcher Dinelson Lamet. The 29-year-old has been in and out of the Padres’ starting rotation the last four years due to injuries and the team’s rotation glut of late (Joe Musgrove, Blake Snell, Yu Darvish, Mike Clevinger, Sean Manaea, MacKenzie Gore and Ryan Weathers) roam the organization.

Lamet has found a considerable amount of success as a starter. He has posted strikeouts at a high clip while successfully relying on his slider. While he has held his own out of the bullpen, teams will likely inquire about Lamet as a starter. Chances are he can be had for a low return, as the Padres don’t have leverage given their rotation depth.

Three years ago, the Royals appeared to be one of the brighter rebuilding teams in the sport. In the present, they’re a young team going nowhere. Surely, their offense has been up and down, but starting pitching has been the primary culprit for the Royals’ shortcomings. Lamet aids them in that regard.

Kansas City has a handful of starters who have flashed potential (Brad Keller, Kris Bubic and Daniel Lynch), but success has been seldom sustained. Lamet gives the Royals a strikeout pitcher in his prime and an arm to be enthused by.

Kansas City has to take a chance on somebody. Most of their noteworthy moves of late have improved the everyday order (Andrew Benintendi, Carlos Santana and Michael A. Taylor). Zack Greinke can be a veteran complement for their young pitchers, but he’s not a long-term piece to the puzzle. Getting Lamet on the cheap is worthwhile for the Royals. Worst-case scenario, he becomes a middle-of-the-rotation starter who provides length.

All that said, the Royals could prefer to acquire a more proven top-of-the-rotation starter than Lamet if they go the trade route.

Yes, the Orioles are one of the more entrenched rebuilding teams in the sport. At the same time, the Orioles need players to build with across the board, and Lamet would be a compelling acquisition for their sake.

Baltimore’s ace and lone reliable starting pitcher since 2019, John Means, recently suffered a season-ending elbow injury. Do Bruce Zimmermann and Kyle Bradish have the potential to be rotation staples? Sure, but it’s not a given that they and Baltimore’s other young/inexperienced starters pan out; the Orioles need depth on that front, anyway.

Lamet gets the Orioles a step closer to rotation stability. He becomes their number one starter for the rest of the season. Lamet needs a team to commit to him as a starting pitcher to get his career back on track, a luxury Baltimore can provide. If Means returns to form next season, the pair of 29-year-olds could form a respectable one-two rotation punch.

All that said, the Orioles may prefer to ride it out with the young pitchers in the building this season and stay the tedious course.

1) Dinelson Lamet to the Chicago Cubs

The Cubs are in the middle of the road. While off to a 9-15 start, they have a handful of budding position players and a pair of high-level starting pitchers in Kyle Hendricks and Marcus Stroman. This is a team with playoff upside. Beefing up their rotation in the form of acquiring Lamet enhances a playoff push.

Chicago’s rotation is off to a nightmare start. Hendricks, Stroman and young left-hander Justin Steele are struggling mightily. Wade Miley, Adbert Alzolay and Alec Mills are still rehabbing from injuries, respectively. At full force and perhaps with a more typical spring training (spring training was delayed due to the MLB lockout), the Cubs have a respectable rotation. Simultaneously, they have to find a way through these circumstances. 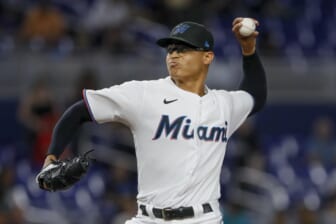 Lamet gives the Cubs a shot in the arm in the present and a rotation fixture beyond 2022. He provides variety in that most of Chicago’s starters rely on inducing weak contact, whereas Lamet frequently gets hitters to whiff at his offerings.

The Cubs are retooling, not rebuilding. Talent-wise, this is a .500 team, but they have the flexibility and organizational depth to make a savvy trade. Lamet can either help the Cubs right the ship on a rough start or be another piece to the puzzle down the road.