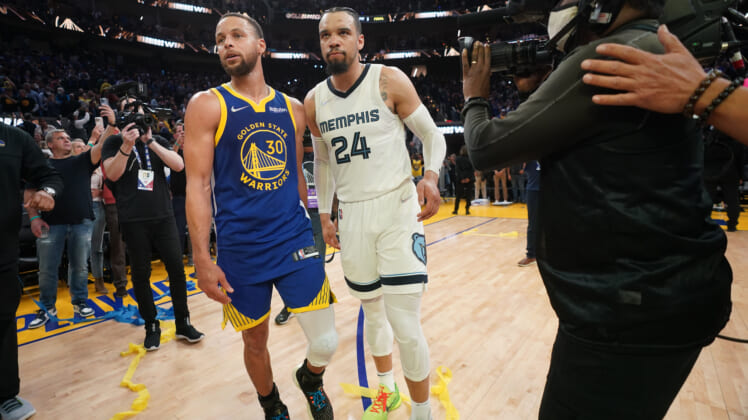 Following their Game 6 loss to the Golden State Warriors late Friday night, Dillon Brooks of the Memphis Grizzlies is having trouble coping with being eliminated from the playoffs, but he’s not letting it impact his hope for the future.

While Brooks had an up-and-down series, his most controversial moment was injuring Gary Payton II in Game 2, leaving the guard with a fractured elbow. This act caused Brooks to be suspended for Game 3, to which many in the NBA community felt wasn’t a harsh enough penalty.

Although Brooks struggled early on in the series, he came back with a big performance in Game 6 with Ja Morant sidelined to a knee injury. Brooks led the Grizzlies with 30 points and also forced three steals in addition to a blocked shot. He was easily one of the best players on the floor, but it was no match for the Warriors’ effort, which included a classic Game 6 Klay Thompson performance.

With less than 24 hours removed from the loss, Brooks sounded bitter when thinking about his recent matchup against the Warriors, taking shots at the team.

Sounds a bit like a player who’s stung from losing the game. It’s understandable, no one wants to lose. Emotions are running high, especially since it’s been less than a day since he was competing for a chance to advance.

Now Brooks will have to settle for watching the Warriors take on the winner of the Suns/Mavericks matchup set to take place on Sunday afternoon. But as he said, he’s not worried about next year. The Grizzlies have a young core compared to the Warriors, but as we’ve seen time and time again, nothing is guaranteed in the NBA, including a chance that Brooks isn’t even on the roster by next season.

Brooks will be in the final year of his contract heading into the 2022-23 season, earning $11.4 million.

Stephen Curry’s response to Dillon Brooks is just as spicy

Based on Stephen Curry’s account, Brooks was making a lot of wild statements during the game, so his comments afterward didn’t come as much of a surprise.

“He’s said a lot of crazy things, he called himself a dynasty already, so you’ve got to figure. On to the next round.”

It’s hilarious that Brooks would call himself, or the Grizzlies, a dynasty, especially to the Warriors who actually were one with Curry.

While Brooks played a big role with the Grizz starting all but one of the 32 games he appeared in, he’s not an untouchable piece of the puzzle. In Memphis, it starts and ends with Ja Morant, with Jaren Jackson Jr. coming in very far behind him.

Brooks is an interchangeable part. Even if the Grizzlies can someday become a dynasty, they’d have to start by advancing past the Western Conference Semifinals first. Which could very well happen, but there’s no guarantee it will be thanks to Brooks, he’s simply a role player, which means he’s just not on Curry, Thompson, or Draymond Green’s level, and chances are, he never will be.