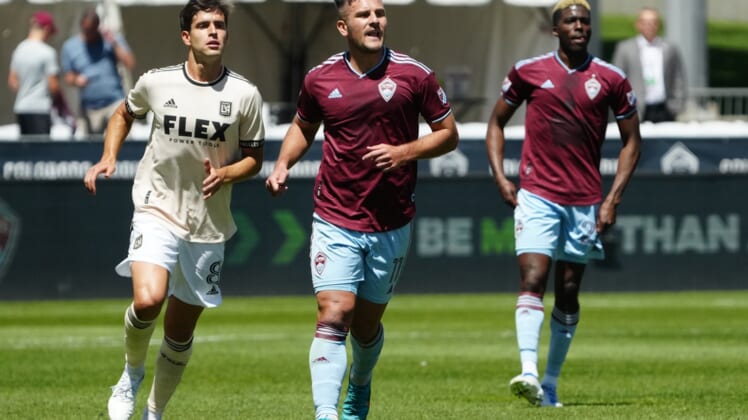 Diego Rubio converted a penalty kick for his team-leading sixth goal of the season and the Colorado Rapids cruised to a 2-0 victory over visiting Los Angeles Football Club on Saturday afternoon.

Gyasi Zardes also scored from the spot for his first goal for his new team after arriving in Colorado last month in a trade from Columbus.

Only 48 hours after completing a U.S. Open Cup match postponed a day by weather, the Rapids (4-4-3, 15 points) showed no signs of fatigue while extending their home unbeaten run to 22 regular-season matches.

Although both goals came from penalties, the Rapids were the clear dominant team over the course of the afternoon, outshooting LAFC 14-13 overall and 6-2 in efforts on target.

Cristian Arango had the visitors’ most dangerous chance in the 85th minute, denied by one of William Yarbrough’s two saves to earn his fifth clean sheet of the season.

John McCarthy made four stops in his first start in goal for LAFC (7-2-2, 23 points), and could not be faulted for either goal. He was playing because manager Steve Cherundolo rested regular No. 1 ‘keeper Maxime Crepeau.

Colorado earned its first penalty in the 16th minute.

Bryan Acosta sent a free kick in Rubio’s direction in the left side of the penalty area.

Referee Ted Unkel ruled that defender Sebastien Ibeagha fouled Rubio with a raised boot as he tried to clear the ball. Zardes stepped up a minute later and powered a finish beyond a diving McCarthy.

The Rapids earned their second penalty in the 24th minute when Unkel ruled Francisco Ginella made a late challenge on Jonathan Lewis.

This time Rubio stepped to the spot. McCarthy dove right to stop Rubio’s first attempt, but was ruled to have left his goal line early following a video review. Rubio drove his second attempt into the top left corner where McCarthy couldn’t reach it.

The visitors improved slightly in the second half, but it was still Colorado that had the best chances to add to its lead.

McCarthy made a pair of impressive stops in the 54th and 56th minutes on Danny Wilson and Jonathan Lewis.

The Rapids also struck the right post twice in the late stages, as Zardes missed an opportunity for his second goal of the day and Auston Trusty for his first of the season.