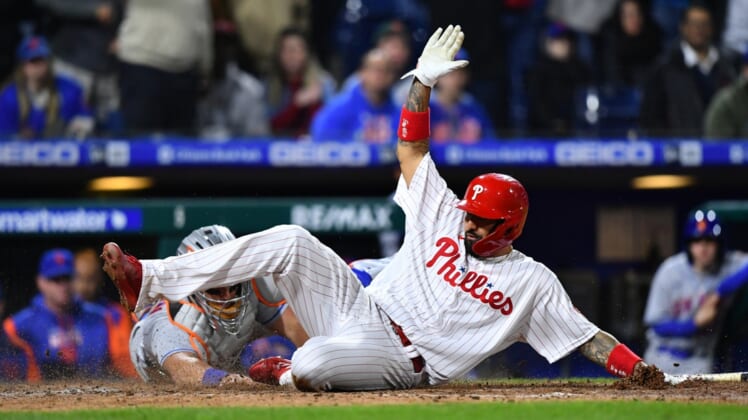 Didi Gregorius’ RBI double capped a five-run eighth inning Monday night by the host Philadelphia Phillies, who stormed back to beat the New York Mets 5-4 in the opener of a three-game series.

Mets starter Taijuan Walker exited after two perfect innings due to an irritated right shoulder, but David Peterson and Trevor May combined for five innings of four-hit relief before the Phillies began rallying when Alec Bohm drew a leadoff walk against May, who immediately left with what appeared to be an arm injury.

Joely Rodriguez entered and gave up a single to Johan Camargo before Kyle Schwarber beat out the back end of a potential double play grounder as Bohm scored from third. J.T. Realmuto followed with a two-run homer to pull the Phillies within 4-3.

Rodriguez struck out Bryce Harper, after which Seth Lugo (0-1) entered and walked Nick Castellanos. Rhys Hoskins followed by lacing a 1-1 pitch to left for a game-tying double and Gregorius put the Phillies ahead by doubling to right-center on a 1-2 pitch.

The rally made a winner out of Seranthony Dominguez (1-0), who allowed one hit over 1 1/3 innings. Brad Hand struck out two in a perfect ninth for his first save.

Philadelphia starter Ranger Suarez allowed three runs on five hits and one walk while striking out one over 2 2/3 innings. Nick Nelson followed with four innings of one-run ball.

Sparking the eighth-inning rally served as a bit of redemption for Bohm, who was charged with three errors in the first three innings. His throwing error on Starling Marte’s infield single helped extend a three-run first for the Mets, who raced out to the early lead on a run-scoring groundout by Pete Alonso and RBI singles by Eduardo Escobar and Mark Canha.

Francisco Lindor added an RBI single in the seventh for the Mets, who blew an eighth-inning lead for the second straight game. The Washington Nationals scored three times in the eighth to earn a 4-2 win over New York on Sunday.

Walker, who underwent knee surgery in the offseason, struck out four in his 2022 debut.