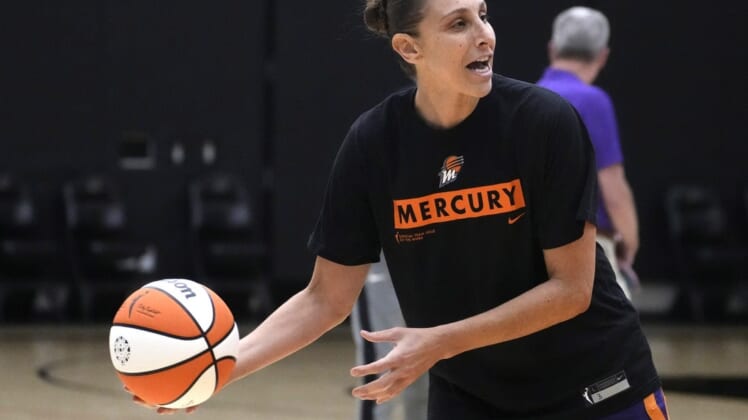 There will be another reason to marvel at Diana Taurasi’s accomplishments on Sunday when her Phoenix Mercury visit the Washington Mystics.

Taurasi celebrated her 40th birthday on Saturday, so the assignment in Washington will mark her first game since reaching that milestone. Taurasi is the WNBA’s all-time leading scorer.

“I don’t know if there’s an equivalent in basketball,” Mercury coach Vanessa Nygaard said. “She’s handling the ball on every possession. She’s making every game-time decision. She’s orchestrating everything.”

The status of another of the league’s veteran standouts is in doubt, however.

Washington might be without Elena Delle Donne again. She left Wednesday night’s win against Chicago with back spasms and didn’t travel with the team for its next game.

Mystics coach Mike Thibault, however, said Delle Donne likely would play Sunday night if she doesn’t have another setback.

The Mystics (9-5) have won two games in a row following a two-game skid. That includes Friday night’s 76-59 victory at Minnesota that involved strong first and fourth quarters.

In the past two games, six different players have reached double-digit point totals for Washington — and Delle Donne hasn’t been one of them.

It was Myisha Hines-Allen’s turn with a season-high 17 points against the Lynx. Add in the regular boosts from Ariel Atkins and the Mystics have various sources of production.

The Mercury (4-8), who just completed a three-game homestand, are making the long trip after posting a 90-88 victory on Friday night against the Atlanta Dream. Taurasi scored 23 points and Tina Charles added 20.

Charles was playing on Friday following a two-game absence due to a shoulder injury.

“She definitely came back with a fire,” Nygaard said. “When she is hot and when she wants the ball, we got to feed the big girl.”

Phoenix is 1-5 in road games, with losses in each of the past five of those outings. Three of the defeats have come by a dozen or more points.