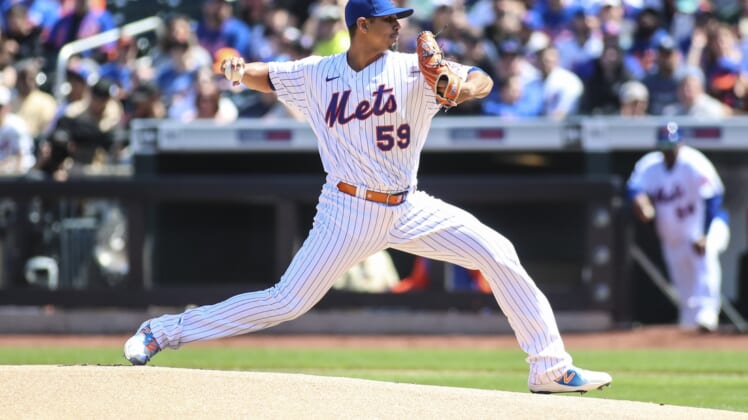 Sergio Alcantara hit a two-run homer and Ketel Marte added an RBI double in a three-run seventh inning as the visiting Arizona Diamondbacks ended an 11-game road losing streak to the New York Mets with a 3-2 victory on Saturday afternoon.

The Diamondbacks won in New York for the first time since getting a 3-2 victory on Aug. 24, 2017 and rebounded nicely from Friday’s 10-3 loss.

Seth Beer, who had three singles and reached four times, began the seventh with a single against Joely Rodriguez (0-1) over the leaping try of shortstop Francisco Lindor. After Seth Lugo struck out Carson Kelly, Alcantara hit a 2-0 sinker over the right-center field seats.

Following a two-out walk to Daulton Varsho, Ketel Marte ripped a double past the diving attempt of first baseman Pete Alonso. The ball just stayed fair and caromed off the fence in foul territory to right fielder Starling Marte, allowing Varsho to score from first.

Starling Marte hit a two-run homer for the Mets, who commemorated former manager Gil Hodges’ upcoming induction into the Hall of Fame. Hodges managed the Mets to their first World Series title in 1969.

Arizona’s Zac Gallen allowed two hits in four scoreless innings in his delayed season debut. His originally scheduled start on Tuesday was pushed back due to a cut on his right thumb.

Kyle Nelson got a double play to end the fifth and Seth Poppen (1-0) got the next four outs after Jeff McNeil opened the sixth with a walk. Joe Mantiply got the final two outs of the seventh and Ian
Kennedy got an inning-ending double play on Alonso after Marte hit a 1-0 fastball into the left-center field seats.

Mark Melancon retired the side in the ninth for his first save as a Diamondback.

New York’s Carlos Carrasco allowed three hits in five scoreless innings. He struck out eight, walked two and was aided by a pair of key defensive plays on Varsho.

In the third, Alonso made a diving stop to end the inning. Two innings later, McNeil crashed into the wall for a running catch with a runner on second.