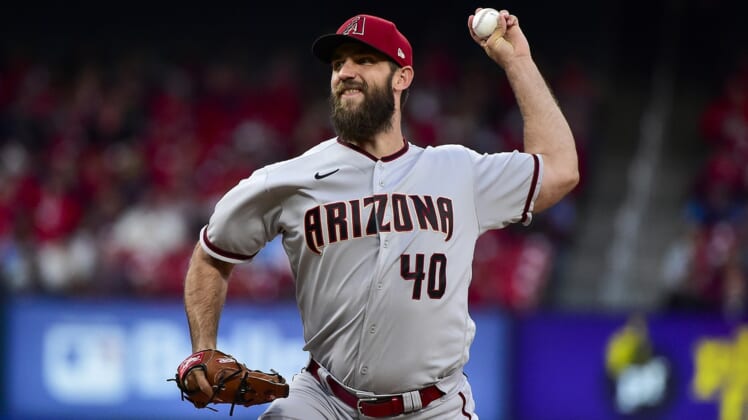 Arizona Diamondbacks left-hander Madison Bumgarner allowed one run in five innings and Daulton Varsho had two hits and an RBI in Friday’s 6-2 win over the host St. Louis Cardinals.

Bumgarner (1-1) settled down after giving up a home run to Paul Goldschmidt on a 12-pitch at-bat with one out in the first inning.

The 14-year veteran went on to retire 14 of the next 17 batters he faced before he was relieved by Luis Frias to start the sixth inning.

Bumgarner allowed three hits with two strikeouts and a walk. He has a 1.17 ERA through five starts this season.

The Diamondbacks took a 2-1 lead in the third inning against 17-year veteran Adam Wainwright (2-3) after Geraldo Perdomo walked and Jose Herrera singled to start the inning.

Wainwright walked two of the first three batters he faced in the sixth inning before Cooper Hummel connected on an RBI single to put Arizona ahead 3-1.

T.J. McFarland relieved Wainwright to start the seventh inning. After walking Herrera with one out and giving up a single to Varsho, he was replaced by Andre Pallante.

Jordan Luplow followed with a single that scored Herrera. Peralta hit a sacrifice fly to center field that plated Varsho to increase the lead to 5-1.

Harrison Bader, who walked with one out in the seventh and moved to third on a single by Yadier Molina, scored when Frias committed a balk, cutting the lead to 5-2.

Noe Ramirez relieved Frias with two outs and gave up a single to Tommy Edman that moved Molina to third base. After Edman stole second, Ramirez struck out Goldschmidt, who has 16 hits in his last 34 at-bats.

Sergio Alcantara’s RBI single in the eighth capped the scoring.