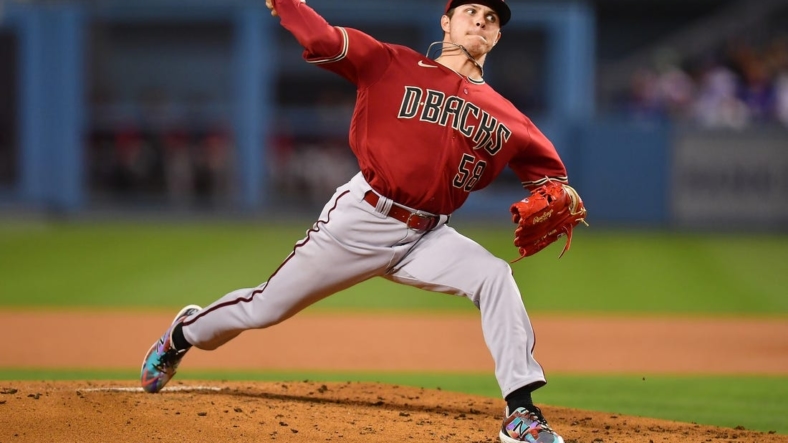 Drey Jameson gave up two runs over six innings in his second career start and the visiting Arizona Diamondbacks earned a doubleheader split Tuesday with a 5-2 victory in Game 2 against the Los Angeles Dodgers.

Arizona took advantage of season-high four Dodgers errors to score three unearned runs. Ketel Marte had a home run and Corbin Carroll had an RBI triple for the Diamondbacks, who won for the second time in their last 22 games at Los Angeles.

In the doubleheader opener, the Dodgers scored five runs in the eighth inning to earn a 6-5 victory as Austin Barnes started the rally with a two-run home run.

In the second game, Max Muncy hit a two-run home run for the Dodgers, who lost to Arizona at home for the first time in seven games this season. Los Angeles is now 13-4 against Arizona.

Jameson (2-0) gave up seven hits with one walk and seven strikeouts. After going seven scoreless innings in his debut last week against the Padres, Jameson went five more scoreless innings Tuesday before Muncy’s home run in the sixth.

The Diamondbacks took a 1-0 lead in the second inning on a throwing error by Dodgers shortstop Trea Turner. With runners on first and second and two out, Sergio Alcantara hit a ground ball between shortstop and third base. Turner fielded the ball but his off-balance throw to get the force out at second base went into right field allowing a run to score.

Much like the opening game of the doubleheader, when the Dodgers had one run through seven innings, the Los Angeles offense was tied up by Jameson.

Los Angeles had two aboard in the first, third and fourth innings but failed to score.

Anderson (15-4), in his first outing since returning from the paternity list, gave up three unearned runs on two hits over six innings.

Marte gave Arizona a 4-2 lead in the seventh inning with his 12th home run and Carroll’s RBI triple came in the ninth.