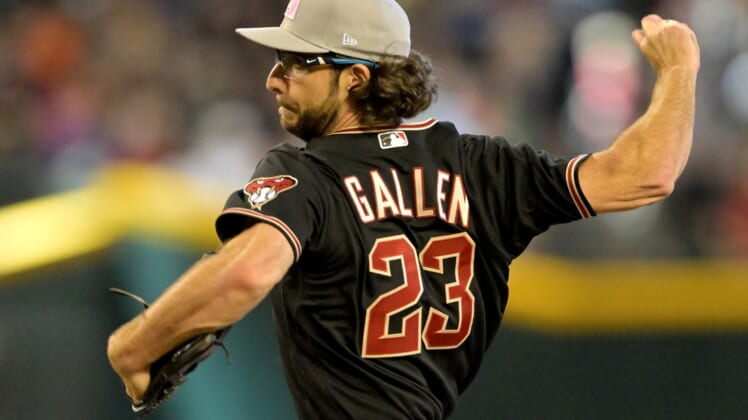 Zac Gallen pitched seven shutout innings, lowering his ERA to 0.95 in five starts this season, to help the Arizona Diamondbacks beat the Colorado Rockies 4-0 on Sunday in Phoenix.

Gallen (2-0) allowed five hits with seven strikeouts and no walks. He retired the last eight batters he faced and did not allow a runner past second base after the first inning.

Arizona, victorious in nine of its past 12 games, won two of three against the Rockies behind starting pitchers Merrill Kelly, Zach Davies and Gallen. They combined to allow only one earned run in 22 innings, with 15 hits allowed, four walks and 21 strikeouts.

Gallen has issued only four walks in 28 1/3 innings this season while posting 26 strikeouts.

The Diamondbacks’ No. 1 prospect, center fielder Alek Thomas, made his major-league debut and got his first career hit in the fifth inning. He doubled to lead off the inning and moved to third on a sacrifice bunt by fellow rookie Jose Herrera, a catcher.

After designated hitter Cooper Hummel — another rookie — reached on a walk, Colorado starter German Marquez (0-3) tried to pick Hummel off at first base but committed a throwing error.

Colorado had its lone scoring threat against Gallen in the first inning after Yonathan Daza singled and Charlie Blackmon doubled with one out. They were left stranded after Gallen struck out C.J. Cron and got Ryan McMahon to ground out.

After Arizona was retired in order in the first inning, the Diamondbacks rallied for three runs in the second after Ketel Marte doubled off Marquez.

Geraldo Perdomo then walked, and Nick Ahmed followed with a single that scored Marte and moved Perdomo to second.

With two outs, Herrera recorded his first career RBIs with a double that brought home Perdomo and Ahmed to put Arizona ahead 3-0.