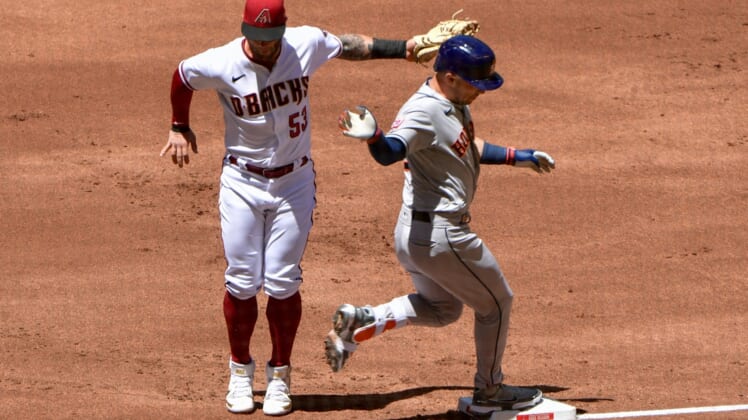 Seth Beer singled in the tying run and Ketel Marte delivered a bases-loaded sacrifice fly in the bottom of the 10th inning as the Arizona Diamondbacks beat the Houston Astros 3-2 on Wednesday in Phoenix.

Houston moved ahead 2-1 on Alex Bregman’s bases-loaded sacrifice fly in the top of the 10th inning before Arizona answered in the bottom half against Astros closer Ryan Pressly (0-1).

Beer singled in a run with one out to knot the score and Pressly walked the next two batters before Marte hit a fly ball to left fielder Chas McCormick, who dropped the ball and allowed the winning run to score.

Oliver Perez (1-0) earned the victory after recording one out in the top of the 10th inning.

Arizona salvaged a split of the two-game interleague set despite stranding 17 baserunners and going 1-for-13 with runners in scoring position.

Jeremy Pena began the top of the 10th inning as the automatic runner at second base and moved to third on a passed ball. Noe Ramirez walked Jason Castro and retired Jose Altuve before intentionally walking Michael Brantley to load the bases. Bregman then hit a sacrifice fly to right field, easily scoring Pena from third.

Arizona starter Merrill Kelly allowed three hits over 5 1/3 scoreless innings. He walked two and struck out six. Kelly has not allowed a run in his first two outings covering 9 1/3 innings.

Arizona pushed across a run in the second inning against Framber Valdez. Cooper Hummel drew a two-out walk to load the bases, and Pavin Smith scored from third after Marte was hit by a pitch.

Valdez escaped further damage and stranded the bases loaded after David Peralta grounded out to end the inning.

Houston pulled even in the seventh when McCormick singled with one out against Sean Poppen. McCormick went to second on a wild pitch, moved to third on Pena’s single, and scored on Martin Maldonaldo’s sacrifice fly.

Chas McCormick had three hits for Houston, which went 1-for-9 with runners in scoring position. Astros designated hitter Yordan Alvarez missed his second straight game with an undisclosed illness.