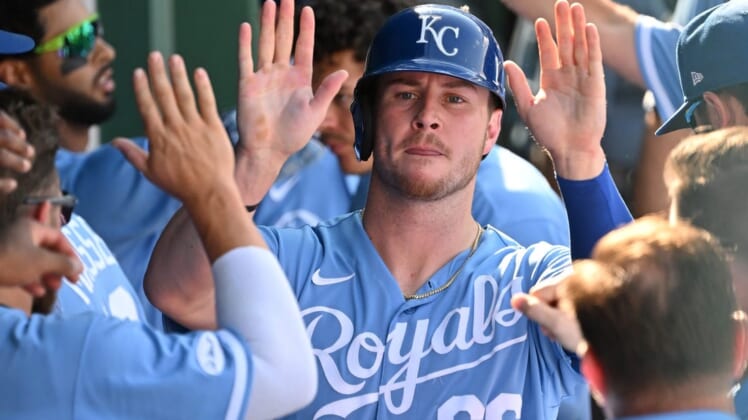 The Kansas City Royals and Arizona Diamondbacks won’t make the postseason this year, but there’s plenty of time to build some momentum for 2023.

Kansas City will be trying to win back-to-back games when it hosts the Diamondbacks in the opener of a two-game series on Tuesday night.

The Royals haven’t made the playoffs since winning the World Series in 2015, while Arizona is set to miss the postseason for a fifth straight year.

The Diamondbacks thought they were gaining traction when they won seven of 10 games earlier this month, which included a pair of series wins over the Colorado Rockies and another three victories against the Pittsburgh Pirates.

After winning the last two games of a four-game set with the San Francisco Giants last week, the Diamondbacks came home over the weekend ready to take on the red-hot St. Louis Cardinals but were swept in the three-game series, including a 16-7 beatdown Saturday.

“It’s a frustrating three games,” Arizona manager Torey Lovullo said. “We’d been playing good baseball, but this goes to show you when you don’t execute and play up to my expectations and our standards, it can back up on you in a hurry. That’s what happened over these past few days.”

Lovullo said the Diamondbacks need to use more finesse at times and quit relying strictly on power.

“I think there’s a give and take to this game where you’re not always on throttle to hit a ball into the fourth row or throw a fastball by somebody at 100 mph,” Lovullo said. “There is deception to this game. There is a controlled aggressiveness that you’re going to go out there and execute and win inches.”

The Diamondbacks plan to send right-hander Zach Davies to the mound for the series opener.

Davies (2-4, 3.99 ERA) has not received a decision in his past five starts or eight of his past nine, even though he pitched the required five innings in eight of those outings.

He has made three starts against the Royals in his career and is 1-1 with a 5.74 ERA. Davies faced them on May 23 and recorded a no-decision in a 9-5 win. He allowed five runs (four earned) and eight hits in 3 2/3 innings, his second-shortest outing of the season.

The Royals will counter with right-hander Jonathan Heasley, who was recalled from Triple-A Omaha on Sunday and will replace Max Castillo in the rotation.

Heasley (1-7, 5.61) has lost his past three starts, but the Royals scored just five runs combined in those games.

He last appeared in a 3-2 loss to the Chicago White Sox in the second game of a doubleheader on Aug. 9, allowing two runs and seven hits in 5 1/3 innings. Heasley only made a pair of mistakes, surrendering two solo homers.