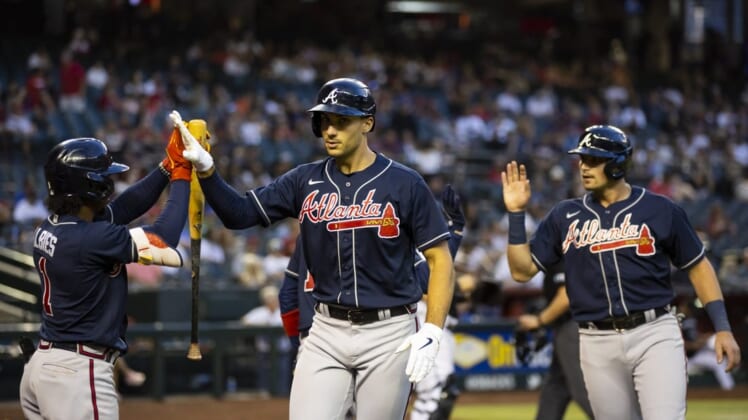 Cooper Hummel’s soft double into the left-field corner drove in the winning run in the 10th inning, sparking a two-run rally to help the Arizona Diamondbacks to an 8-7 win over the visiting Atlanta Braves on Tuesday in Phoenix.

David Peralta began the inning with a single that scored designated runner Jake McCarthy, then advanced to second base on the throw. Hummel, who had been 0-for-4, hit a 2-0 pitch against Jackson Stephens (1-2), enabling Arizona to win a game it once trailed 6-2.

Atlanta had taken the lead in the top of the inning on Austin Riley’s single.

Arizona scored two runs in the first inning. Leadoff hitter Daulton Varsho was hit by an 0-2 pitch and scored on Christian Walker’s 13th homer. Walker went 3-for-4, scored a run and drove in three.

The Braves got a run in the third on a double by Ronald Acuna Jr., who was thrown out trying to stretch it into a triple.

Atlanta got two runs in the fourth on Matt Olson’s upper-deck home run and two more in the fifth on Olson’s two-out double. Olson went 4-for-5 with three extra-base hits.

The Braves upped the lead to 6-2 with a run in the sixth. Ozzie Albies doubled on a misplayed fly ball and scored when rookie Michael Harris II lined a single to center to pick up his first major league RBI.

The Diamondbacks got two runs back in the sixth, on Pavin Smith’s sacrifice fly and an RBI double by Walker.

Arizona made it a one-run game with a run in the eighth. Peralta grounded out with the bases loaded.

Arizona tied it on Varsho’s sacrifice fly against Kenley Jansen in the ninth.