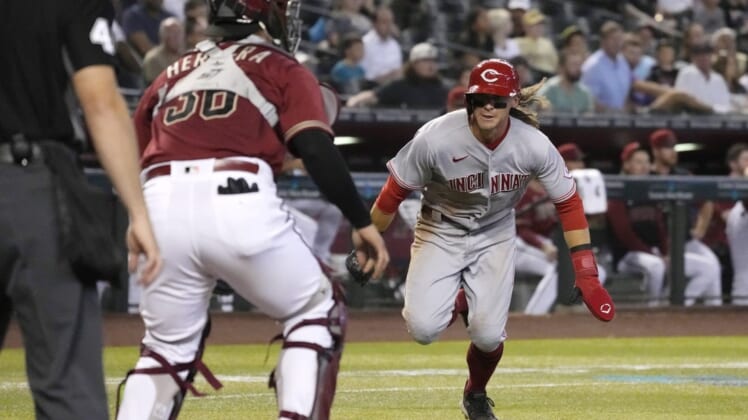 Geraldo Perdomo went 2-for-4 with a home run and three RBIs, while David Peralta doubled and also had an RBI single to highlight a four-run eighth inning, to lead the Arizona Diamondbacks to a 7-4 victory over the Cincinnati Reds on Wednesday at Phoenix.

Noe Ramirez (2-1) picked up the win in relief of Diamondbacks starter Zac Gallen who hit four of the first eight batters he faced to set a franchise single-game record for most hit batters in a game. Gallen, who allowed two runs on two hits over seven innings while striking down five, settled down to retire the last 16 batters he faced.

Brandon Drury homered and Jonathan India had an RBI double for Cincinnati, which had a three-game winning streak snapped. Reds reliever Art Warren (2-3) allowed four runs on three hits in just one-third of an inning.

Cincinnati took a 2-0 lead in the second inning, taking advantage of Gallen’s wild streak in the process. Nick Senzel was hit by a pitch and advanced to third on a single by Albert Almora Jr. Senzel then scored on an errant pickoff throw by Gallen, with Almora getting thrown out trying to take third.

Gallen then hit TJ Friedl in the right arm, his fourth hit batter, which was one shy of the single-game record of five set by Oscar Jones of the Brooklyn Superbas in 1903. One out later, India drove in Friedl with a line double to left.

Arizona took a 3-2 lead in the bottom half of the inning. Peralta led off with a double and scored one out later on an opposite field double by Alek Thomas. Perdomo then hit the next pitch 408 feet into the bleachers in right for his second homer of the season.

Drury tied it 3-3 in the eighth with his team-leading 13th home run of the season and fourth against the Diamondbacks.

Arizona answered with four runs in the bottom half of the inning. Josh Rojas and Ketel Marte opened the inning with singles. One out later, Rojas ran through a stop sign and scored on Peralta’s single to shallow right for a 4-3 lead.

Marte made it 5-3 when he scored on a fielder’s choice by Pavin Smith. One out later, Perdomo singled to drive in Peralta. Smith then scored on a balk by Reiver Sanmartin to complete the four-run rally.

The Reds cut it to 7-4 in the ninth when Joey Votto singled, advanced to second on a walk pitch and scored on a single by Mike Moustakas.