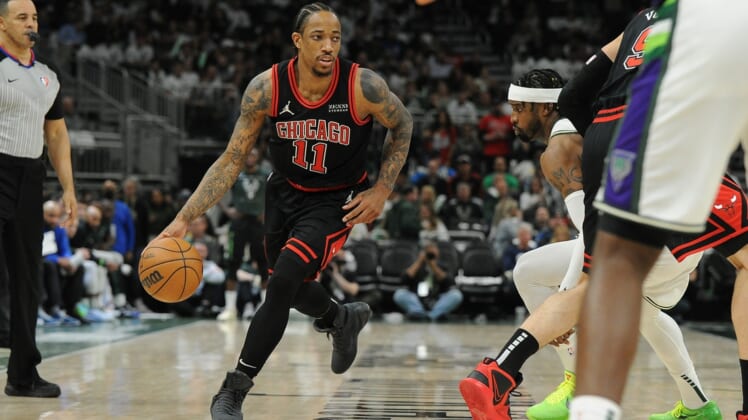 DeMar DeRozan vowed the Chicago Bulls would improve on their dud of an opener in their Eastern Conference first-round playoff series against the Milwaukee Bucks. Now that he has delivered, the anticipation for an encore is rich.

The Bulls managed to pull off a 114-110 victory at Milwaukee in Game 2 to even the series 1-1 after DeRozan said Chicago would be a better shooting team. Game 3 is in Chicago on Friday night.

While the Bulls have restored their confidence, the Bucks are dealing with a shuffled lineup prompted by Khris Middleton’s sprained MCL in his left knee. Middleton left Game 2 with 6:49 remaining and did not return. It’s possible he will miss the rest of the series and beyond.

Following a lackluster 86-point effort in the series opener, when they shot 32.3 percent from the field, the Bulls shot 49.4 percent Wednesday. Proving to be an even further man of his word, DeRozan himself was 16 of 31 (51.6 percent) and scored a career playoff-high 41 points.

The Bulls had lost four consecutive games to the Bucks in the regular season and the loss in Game 1 made it look like the losing trend would not end any time soon. Now the Bulls head home for the next two games of the series, while looking to take the lead against the defending NBA champions, who have a big hole to fill.

“It doesn’t matter what you did in the regular season,” DeRozan said. “It’s a brand new start, brand new mindset. You can see it in all the guys. It doesn’t matter if we lost 20 times to (the Bucks), this is a new opportunity to compete and we’ve got to take advantage of it.”

“We got our spirit back,” said the Bulls’ Alex Caruso, who scored nine points in Game 2, but more important, played key defense to help Chicago change the complexion of the series.

There figures to be no panic from the Bucks. They have Giannis Antetokounmpo, after all, and it’s not like he laid an egg in Game 2, with 33 points on 11-of-20 shooting, while adding 11 made free throws. He also had 18 rebounds and nine assists.

“Credit to Chicago,” Bucks coach Mike Budenholzer said. “Especially those early (forced turnovers). The hands and the activity. Getting deflections. Creating turnovers. We got to be sharper.”

The Bucks stuck with the same scheme that worked well in Game 1, and now that the Bulls have made the necessary adjustments, Milwaukee figures to counter again in an attempt to regain control.

How they adjust without Middleton moving forward will prove to be key.

“Obviously Khris is one of the best players on the team,” Antetokounmpo said. “If he’s not able to be with us, it going to be a tremendous loss for us.”

“We got to play better,” Antetokounmpo said. “Execute better. Have more fun. I don’t feel like we were enjoying the game as much as possible.”