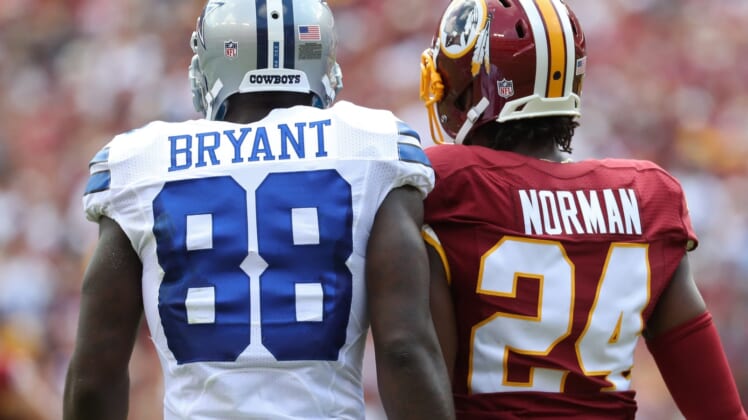 Josh Norman recently had some not-so-nice things to say about NFC East rival Dez Bryant, who he doesn’t see as much of a threat. Among the things the Washington cornerback said about the Dallas Cowboys receiver is that Bryant is “just a guy” who doesn’t “wow” with his play on the field (full comments here).

When asked to respond to Norman’s disparaging remarks, Bryant showed some maturity.

“No, no, no, no. Why would I respond to that? He’ll see me when he sees me. When I line up against him, we’re going to go at it. That’s what it is,” Bryant said, via Clarence E. Hill Jr. of the Star-Telegram. “I don’t have no words to say to him. … There’s no extra motivation. All I care about is me. All I care about is that first game, that second game, that third game, that fourth game, all the way up to the last game, all the way up to the playoffs.”

Regardless of what Bryant says about there being “no extra motivation,” we’re not buying that angle. Of course there’s extra motivation to shut Norman up. However, we applaud Bryant for not letting his mouth do the talking through the media. Instead, he’s smartly choosing to let his play on the field talk for him.

We can’t wait to see these two line up against one another this coming season. Their first opportunity to go head-to-head comes on Sunday, October 29 in Washington. Then they’ll meet up again on Thursday, November 30 for the second meeting between the two NFC East rivals.