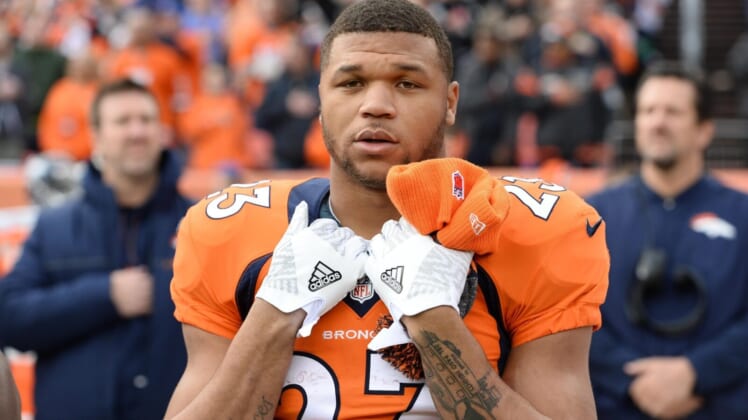 Devontae Booker is looking for new life in a young career high on promise and now with a great opportunity to contribute behind Josh Jacobs in Las Vegas.

When Devontae Booker was a fourth-round pick of the Denver Broncos out of Utah, he never envisioned his time in Denver ending like it did. Without many opportunities, and less and less carries over his final two seasons in the Mile High city, Booker was looking for a new opportunity.

When the chance came to join his favorite team growing up – the Raiders – he jumped at the chance.

“I guess it’s just the organization,” Booker told us on Silver and Black Today on CBS Sports Radio 1140 on Sunday. “With Coach Gruden and the staff, I can just recognize real. It seems like a good environment to come in and play ball. Shoot, like you said earlier, it’s just a good opportunity for me.”

Booker is coming off a forgettable 2019 that saw just record six receptions for 57 yards and mustered a mere two carries for nine rushing yards the entire season. The fourth-year pro played in 15 games but feel out of favor under Broncos coach Vic Fangio. He’s a similar runner to Jacobs and adding depth in the running back room was a key off season goal for the team.

Now Booker comes to Las Vegas where the Raiders offense has all sorts of new weapons, a proven veteran quarterback, and a massive offensive line to run behind too.

“I never really had that in Denver,” Booker said of the Raiders stout front five. “It’s kind of different, but shoot, I’m excited to get to run behind some guys who like to block and feed them big dudes whatever they want.”

Devontae Booker looks to be fighting Rod Smith for one of the Raiders roster spots. In 2019, Gruden carried just four running backs. With Jacobs, Jalen Richard, and Alec Ingold all but assured of a spot, that means Booker will be fighting for his opportunity to help the Raiders each and every week before final cuts.

The competition and possible role he could fill for the Raiders doesn’t phase the Sacramento native. Given a new opportunity, on a new team, in a new market Las Vegas has Booker itching to get back on the field.

“It’s a good opportunity for me and I really think I can fit in and help win some games,” Booker said. “I’m ready. Like I’ve been telling everybody I’ve never felt this excited since the day I got drafted. Now I just have to put in the work, gain the trust if the coaching staff, and go out there and put it all on the field.

In addition to the opportunity to play for the storied Raiders franchise, joining the team at at time when it moves to Las Vegas and opens the new Allegiant Stadium was also a plus for Booker.

“It’s crazy just thinking about it really,” Booker said. “Opening up a new stadium, it’s going to be exciting to play in the new home we’ll have there. and I just can’t wait.”

Hear the entire Silver and Black Today show on CBS Sports Radio 1140 interview with Devontae Booker below and don’t forget to subscribe.