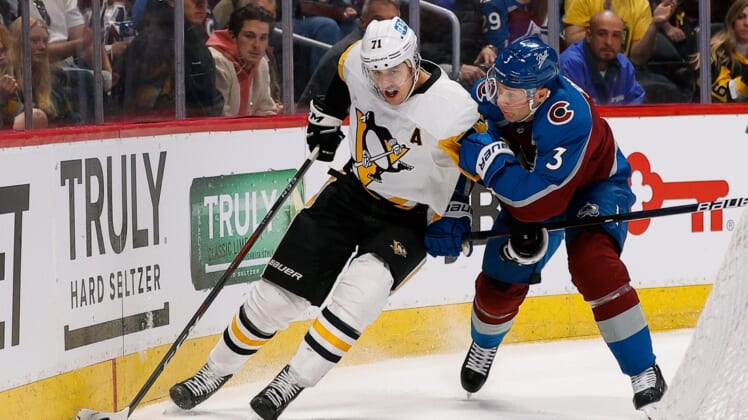 Devon Toews scored a tiebreaking goal late in the third period, Mikko Rantanen had a goal and an assist, and the Colorado Avalanche beat the Pittsburgh Penguins 3-2 in Denver on Saturday.

Sidney Crosby and Mike Matheson had goals, Jake Guentzel had two assists and Tristan Jarry made 35 saves for the Penguins (41-19-10, 92 points).

Despite combining for 28 shots in the first period the game remained scoreless. Kuemper kept Pittsburgh off the board when he made a save on a breakaway chance by Evan Rodrigues, one of 17 stops he had in the first 20 minutes.

It stayed scoreless until midway through the second when the Avalanche finally broke through. MacKinnon sent a pass to Andre Burakovsky at the top of the slot and his shot went high off Jarry, who couldn’t corral the puck. Rantanen then batted it off Jarry’s shoulder and in at 9:59 for his team-leading 35th goal of the season.

The Penguins tied it a few minutes later when Kris Letang’s shot went off Kuemper and to the front of the net where Crosby knocked it in to tie it at 14:46. It was his 26th goal of the season.

Colorado answered 20 seconds later when Alex Newhook brought the puck into the Pittsburgh zone, lost it as he skated in but Aube-Kubel skated to it and blasted a shot just inside the right post at 15:06. It was his eighth goal of the season.

Pittsburgh tied it up in the third period when Guentzel sent a pass through the slot to Matheson, who beat Kuemper at 15:07. It was his 10th of the season.

The Avalanche again responded quickly. MacKinnon’s shot from the top of the zone ricocheted off the back boards right to Toews on the other side of the net, and he buried it for his 13th of the season at 15:34.

Jarry came off for an extra skater with 1:28 left but the Penguins couldn’t tie it.