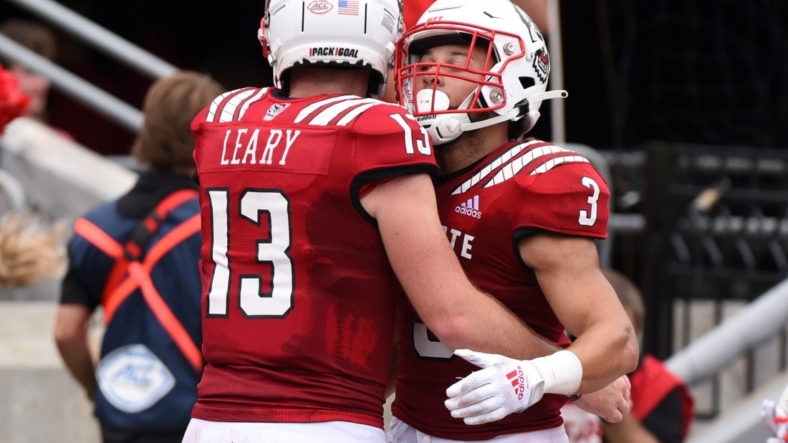 On his 23rd birthday, Devin Leary totaled a program-tying-record six touchdowns Saturday as he used his arm and legs to power No. 18 North Carolina State over visiting Charleston Southern 55-3 in Raleigh.

Leary — tabbed as the Atlantic Coast Conference Preseason Player of the Year — bounced back from a sluggish Week 1 performance at East Carolina to lead N.C. State (2-0) to a dominant home victory. He completed 16 of 25 passes for 238 yards and four touchdowns, while also adding a pair of rushing scores. Leary’s four scoring strikes through the air tied his career high.

Perhaps the most impressive play by Leary came with 6:31 to play in the second quarter when he faked a handoff, shook off a sack, ran to his left and then fired a 40-yard strike down the field that landed in the mitts of Anthony Smith for a touchdown.

It’s the first time the Wolfpack have scored more than 50 points since 2018. With the win, N.C. State extended its winning streak at Carter-Finley Stadium to 11 games, a streak that dates back to the 2020 season. The Pack also improved to 10-0 in home openers under coach Dave Doeren.

Charleston Southern (0-2) didn’t score until midway through the third quarter, connecting on a 48-yard field goal from Sam Babbush after the Buccaneers recovered a Wolfpack fumble.

At halftime, N.C. State led 38-0 and Charleston Southern had just 86 yards of total offense with zero yards in the rushing game.

Leary was relieved in the third quarter by backup Jack Chambers, who began his collegiate career at Charleston Southern. MJ Morris also featured at quarterback for the Pack. The trio completed passes to 14 different receivers. The Wolfpack finished with 538 yards of total offense compared to just 150 for Charleston Southern.

The Buccaneers of the FCS are now 0-26 all-time against opponents in the FBS. Under Doeren, the Wolfpack are 10-0 against FCS teams.