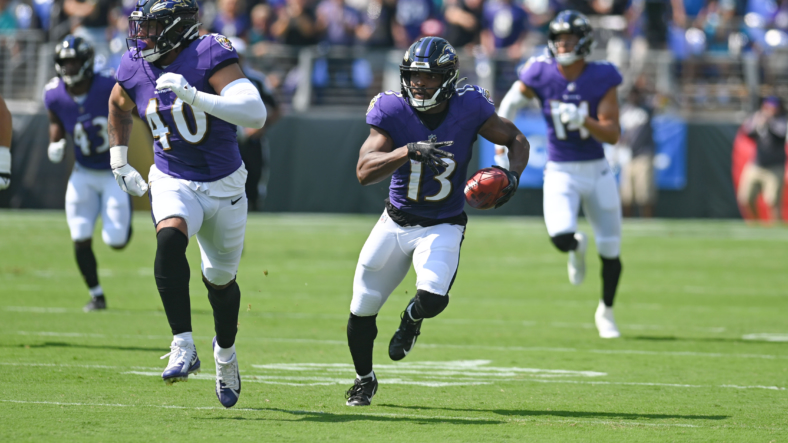 Third-year Baltimore Ravens wide receiver Devin Duvernay has been an ace in the hole for head coach John Harbaugh over the past few seasons. In fact, the Texas product led the NFL by averaging 13.8 yards per punt return en route to earning Pro Bowl and All-Pro honors in 2021.

It didn’t take Duvernay too long to make his impact known against the Miami Dolphins on Sunday. He took the opening kickoff 103 yards and to the house for a touchdown as Week 2 got going around the NFL on Sunday.

More than anything, the field vision to find holes early in the run and Duvernay’s willingness to follow blockers is what set this one up. It’s a huge game-opening play in a battle between two early-season undefeated teams.

Devin Duvernay could be an X-factor for the Baltimore Ravens

Baltimore’s decision to trade star wide receiver Marquise Brown during the 2022 NFL Draft threw a lot of people for a loop. It created a major hole at that position for quarterback Lamar Jackson. There were questions about who might fill the vacuum. Despite his stellar special teams play, Duvernay had not yet made much of an impact on offense.

That changed big time in a Week 1 win over the New York Jets. The former third-round pick caught all four passes thrown in his direction for 54 yards and two touchdowns.

If Devin Duvernay can provide this type of impact on both offense and special teams, it will go a long way in Baltimore potentialyl vying for a conference title this season.