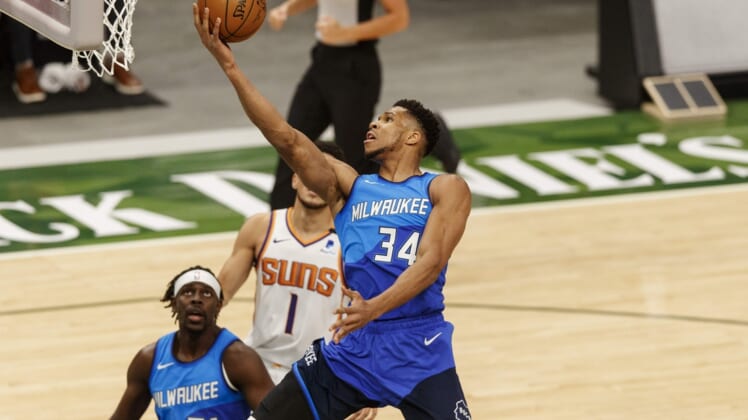 Devin Booker made a free throw with 0.3 seconds remaining in overtime to lift the visiting Phoenix Suns to a 128-127 win over the Milwaukee Bucks on Monday.

After Phoenix’s Mikal Bridges and Milwaukee’s Khris Middleton exchanged 3-pointers in the final 30 seconds of OT to force a 127-127 tie, Booker dribbled around the perimeter looking to get free for a final shot. His off-balance attempt under duress drew a foul call on P.J. Tucker to set up the game-winning free throw on his first of two shots at the line.

Phoenix’s Chris Paul produced 22 points and 13 assists, Bridges scored 21, and Deandre Ayton finished with 20 points and 13 rebounds. Four of Ayton’s points came during a crucial, 12-2 run in the late fourth quarter that turned the Suns’ 109-102 deficit into a 114-111 lead.

Ayton also came through on a few defensive stands in the fourth quarter, denying Giannis Antetokounmpo clean looks at the basket.

Antetokounmpo, the two-time reigning NBA Most Valuable Player, scored 33 points, his highest output in three games back from a six-game absence caused by a knee injury. However, he played less than a minute in overtime.

Phoenix held Milwaukee scoreless for the first 3:10 of OT, building a six-point lead before 3-pointers from Pat Connaughton, Tucker and Middleton brought the Bucks back.

Middleton finished with 26 points, including five in the final 1:18 of regulation. Jrue Holiday added 25 points and eight assists for Milwaukee.

Bridges hit 5 of 7 3-point attempts as Phoenix finished 17 of 42 (40.5 percent) from long range. Outside shooting helped the Suns keep pace with Milwaukee despite the Bucks’ 64-42 advantage in points in the paint.

The Bucks shot 11 of 34 (32.4 percent) from long range, with Connaughton going 3 of 4. He scored all nine of his points from beyond the arc.

With the win, Phoenix avoided its first losing streak since January. The Bucks took a second straight loss and fell for the fifth time in eight games.