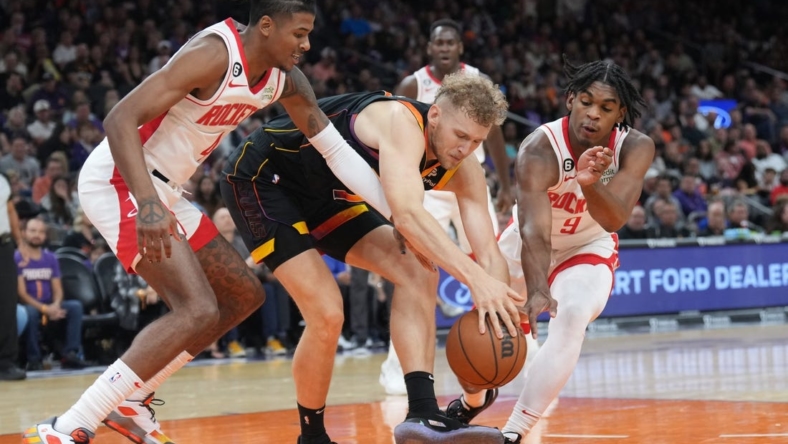 Devin Booker scored a game-high 30 points on his 26th birthday to help the Phoenix Suns fend off the visiting Houston Rockets 124-109 on Sunday.

Booker shot 14 of 24 overall despite missing 6 of 7 3-pointers to pace seven Suns in double figures. Phoenix led by as many as 12 points in the first half but repeatedly had to stave off spurts from the Rockets, who have dropped the first three games of their four-game road trip.

Kevin Porter Jr. drilled a 3-pointer that pulled the Rockets to within 93-90 with 10:39 remaining but the Rockets followed with a two-minute scoring drought that enabled the Suns to maintain a working margin. When Bismack Biyombo completed a three-point play at the 5:01 mark, Phoenix led 105-98. The Suns reclaimed their double-digit lead at 110-100 on a Chris Paul (10 points, 15 assists) jumper with 3:47 left. Paul assisted Biyombo on his basket through the foul.

Booker was assertive early, hoisting 10 shots in the opening period while tallying 11 points. But the Rockets’ bench provided a collective effort to offset Booker, and when Tari Eason followed his second-chance basket with a layup following his steal, Houston pulled even at 21-21. Eason (nine points) added a 3-pointer down the stretch of the first, but Phoenix led 29-24 entering the second.

When Garrison Mathews drilled a corner 3-pointer off a Usman Garuba offensive rebound, the Rockets were back to within 38-36. But reserve Jock Landale (16 points, six rebounds in the half) offered a critical counter to the Rockets’ bench production in the first half, starting with his steal and second-chance basket off the Rockets’ 10th turnover of the half. Johnson capped a Phoenix run with a transition dunk that extended the Suns lead to 53-42, and after Booker sank a midrange jumper with 4.9 seconds left in the second, the Suns led 65-56 at the break.