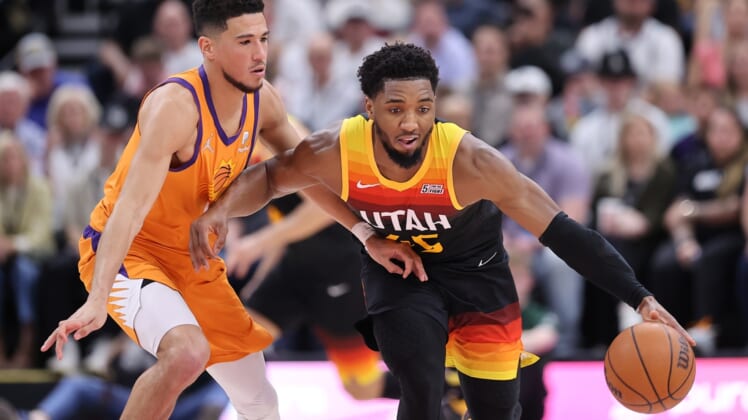 Devin Booker scored 33 and Chris Paul added 16 points and 16 assists as the Phoenix Suns rallied from a 17-point deficit in the fourth quarter to stun the Utah Jazz 111-105 Friday night in Salt Lake City.

The result added another W to the best ever record for Phoenix (64-17) and boosted the NBA-leading Suns to a franchise-record 32nd win on the road.

Deandre Ayton (19 points, 10 rebounds) and Mikal Bridges (18 points) stood out on both ends of the court in the final quarter as the Suns outscored the Jazz 36-13. This rally came two days after Phoenix reserves nearly overcame a 39-point deficit against the Los Angeles Clippers.

Bojan Bogdanovic led the Jazz (48-33) with 21 points and Rudy Gobert compiled his 52nd double-double with 16 points and 12 rebounds. Utah had a chance to clinch the No. 5 spot in the Western Conference playoffs — the Suns are locked in at the top — but the Jazz are now tied with the Denver Nuggets.

The Jazz wrap up their regular season Sunday night in Portland at the same time Denver hosts the LeBron James-less Los Angeles Lakers. Utah will earn the fifth seed with a win, and will fall to No. 6 with a loss and a Denver victory.

Donovan Mitchell scored 18, but only shot 7-for-21 for the game and contributed only one free throw during the fourth-quarter collapse. Mike Conley Jr. also struggled from the field, hitting 4 of 13 for 13 points, and the Jazz shot 39.8 percent for the game while Phoenix made exactly half of its shots (46 of 92).

The game was full of wild runs by each team. Phoenix opened on an 11-0 run, Utah scored the first 14 of the second quarter and the Jazz began the third quarter with a 13-4 run for a 70-58 advantage.

Utah finished the third by scoring eight points in the last 50 seconds, including five in the final 13.4 thanks to a Gobert bucket and a last-second Jordan Clarkson 3-pointer for a 92-75 lead heading into the final quarter.

The Jazz, who’ve struggled to maintain big leads this season, called a timeout midway through the fourth after the Suns trimmed the gap to eight. That didn’t slow them down, though. Bridges capped a 13-0 run with an off-balance layup to tie the game.

A moment later, Bridges put the Suns up 104-102 with a strong dunk and then added three more on an old-fashioned three-point play.

Ayton followed a Conley bucket with a layup after being set up nicely by Paul, and the Suns closed out from there.