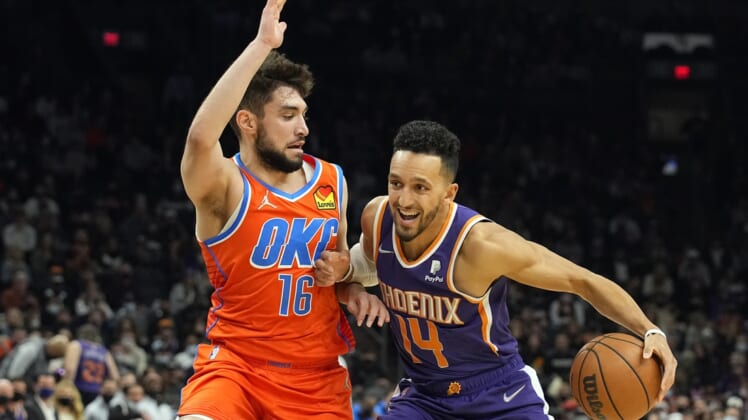 Devin Booker matched his season high of 38 points while reaching a milestone and also had seven rebounds and five assists to lead the Phoenix Suns to a 115-97 victory over the visiting Oklahoma City Thunder on Wednesday night.

Booker has scored 68 points in less than a week against the Thunder. He scored 30 when Phoenix registered a 113-101 home win over Oklahoma City last Thursday.

Both head coaches missed the game due to COVID-19 protocols — Monty Williams of Phoenix and Mark Daigneault of the Thunder. Assistant Kevin Young coached the Suns for the second straight contest while assistant Mike Wilks ran the Thunder for the second consecutive game.

The Suns were without four players due to COVID-19 protocols, including Deandre Ayton and Jae Crowder.

Mike Muscala scored 13 points, Paul Watson added 11 and Isaiah Roby scored 10 for the Thunder, who made 39.6 percent of their shots and were 7 of 35 from behind the arc.

Oklahoma City was within 98-93 after a 3-pointer by Wiggins with 6:43 left before Phoenix rattled off 10 straight points.

Booker scored six points during the run as the Suns increased their advantage to 15 with three minutes remaining and cruised to the finish.

Booker scored 23 points in the first half as the Suns led 60-52 at the break.

The Thunder rallied to lead 75-72 after Wiggins’ basket with 4:05 left in the third quarter.

The stanza ended with McGee knocking a 23-footer through the hoop prior to the buzzer to give the Suns an 85-81 edge.