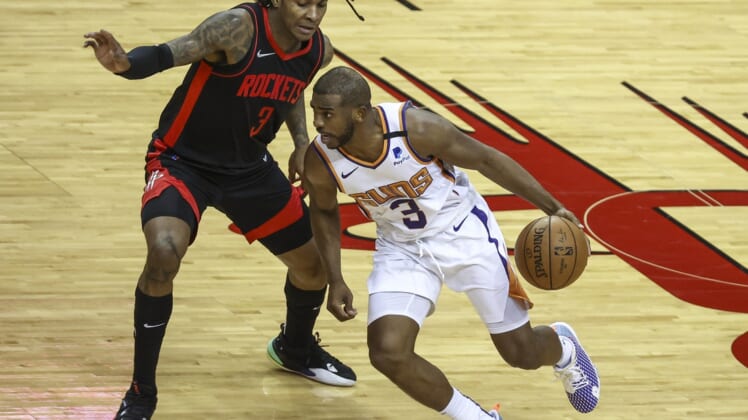 Devin Booker scored a game-high 36 points, Deandre Ayton and Chris Paul recorded double-doubles and the Phoenix Suns extended their winning streak to six games with a 133-130 victory over the host Houston Rockets on Monday.

Booker sank four free throws in the final 37.8 seconds left and picked off a Jae’Sean Tate pass at the final buzzer to seal the win. Booker finished 6 of 8 from 3-point range, 8 of 9 from the free-throw line and added six rebounds and six assists to his sparkling ledger.

Ayton (27 points, 11 rebounds) and Paul (19 points, 11 assists) were part of the Suns’ dynamic offensive performance that included an 18-of-37 effort on 3-point tries. Mikal Bridges went 4 of 6 from deep and scored 20 points while Paul and Cameron Johnson (12 points) drilled three treys each.

Despite the Suns’ exceptional shooting, the Rockets hung close until the end.

Houston erased what was a 15-point deficit by bridging the final two periods with a 13-0 run, with successive 3-pointers from D.J. Augustin, Kenyon Martin Jr. and Tate pulling the Rockets even at 101-101. After Bridges’ dunk with 64 seconds left lifted Phoenix to a nine-point lead, Tate and Kelly Olynyk converted from deep to cut the deficit to 129-126 and set the stage for a tense final minute.

The Suns were scorching from the start, drilling 7 of 8 3-point attempts to open the game. But Houston set the tone for the night in the first quarter, pulling even at 34-34 entering the second by nearly matching Phoenix in shooting (59.1 percent to 54.5 percent) while adding 6-of-6 shooting from the foul line.

After a Wood dunk pulled Houston to within 53-52, Phoenix closed the first half with a 17-8 run, with Ayton scoring six points while Bridges chipped in a 3-pointer and a layup.