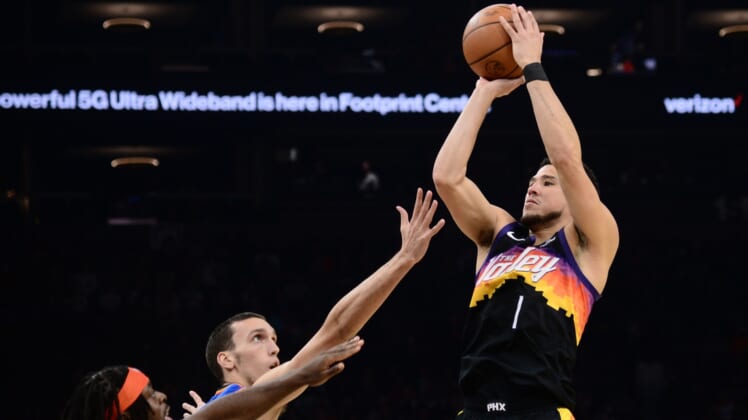 Devin Booker scored 30 points to lead the Phoenix Suns to a 113-101 win over the Oklahoma City Thunder on Thursday in Phoenix.

Booker took control in the third, with 15 points and four assists in the frame to help the Suns jump ahead for good and win their fifth game in a row.

Oklahoma City led by as many as six in the third before Phoenix put their foot down, closing the third with a 17-5 run.

Booker scored nine during the stretch, which lasted just more than four minutes.

The Thunder were just 2 for 7 from the floor to end the third.

Oklahoma City trimmed the lead to eight thanks to five fourth-quarter 3-pointers, including a pair by Jeremiah Robinson-Earl. But Booker scored seven in the final four minutes to keep the Thunder from getting any closer.

Even with that strong spurt in the fourth, Oklahoma City finished just 11 of 41 from beyond the arc. Luguentz Dort was 2 of 9 on 3-pointers.

Phoenix scored 22 points off 13 Thunder turnovers in the win. The Suns turned the ball over 14 times but Oklahoma City scored just nine points off those turnovers.

Cameron Johnson added 21 points and nine rebounds off the bench. He hit all seven of his field goals, including tying a career high with five 3-pointers.

Deandre Ayton had 19 points and 12 rebounds while Chris Paul had 16 points, seven assists and five rebounds.

Shai Gilgeous-Alexander led the Thunder with 29 points while Josh Giddey had 17.

The Suns got out to a fast start, jumping out to a 14-3 lead. The Thunder were just 1 of 8 from the floor with four turnovers over the first five minutes.

Oklahoma City was just 1 for 11 from beyond the arc in the first, scoring just 17.

The Suns led by as much as 15 in the second before the Thunder closed the half strong, with a 24-8 run over the last seven minutes to take a 48-45 lead into the break.