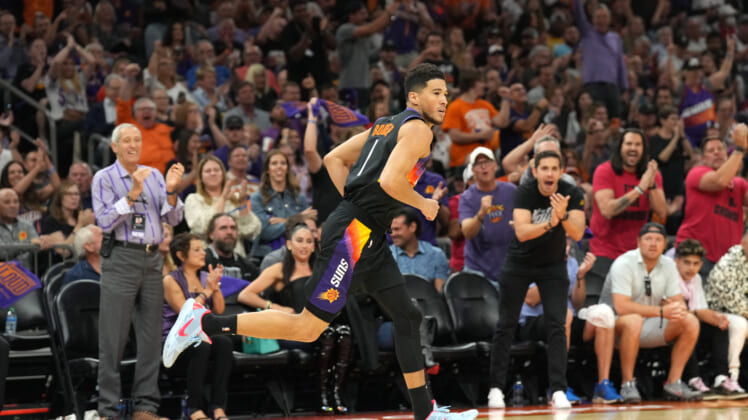 Phoenix Suns star guard Devin Booker found out first-hand in the opener of their second-round NBA playoff series against the Dallas Mavericks just how much officials can impact a game.

These officials have made themselves a huge part of the playoffs in recent days, and it’s just not a great look for the NBA.

With Phoenix up 20-6 about midway through the first quarter, Devin Booker swatted away a Jalen Brunson shot. In an attempt to fire up Suns fans inside Footprint Center and his own teammates, Booker showed this thing called passion. Apparently, that’s not allowed in today’s NBA.

As you can see, Booker was taken aback by the taunting technical called on him. This is an actual thing NBA officials are calling during postseason games. Taunting for talking the talk after backing it up on the court?

It was just this past Sunday afternoon that Golden State Warriors star Draymond Green was ejected in Game 1 of his team’s series against the Memphis Grizzlies for a hard foul on Brandon Clarke. Said ejection also threw the NBA world for a loop with at least one big-name player calling out the officials.

As for Devin Booker and his Suns, they finished the first quarter up 35-25. The star guard — making his fourth appearance since suffering a hamstring injury late in the regular season — scored 13 points on 4-of-8 shooting in those first 12 minutes.