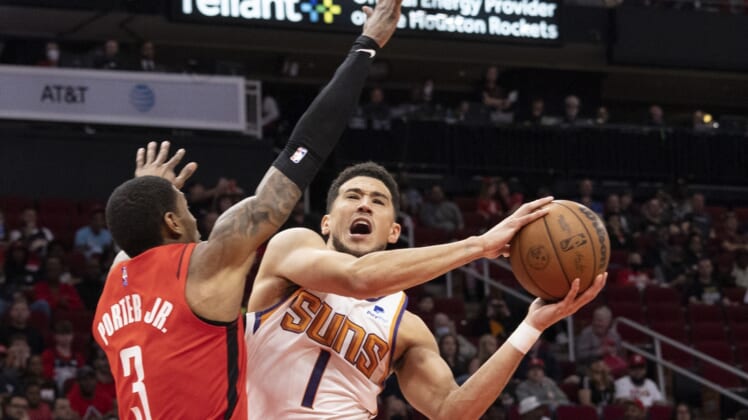 Devin Booker scored 15 of his game-high 36 points in the third quarter to help the visiting Phoenix Suns pull away from the stubborn Houston Rockets 129-112 on Wednesday.

Booker was the ignition behind a 12-1 run that enabled the Suns to finally subdue Houston, drilling a pair of 3s that silenced a Rockets run back into contention. Booker nailed a stepback 3-pointer at the 5:23 mark of the third that helped Phoenix reclaim its double-digit lead at 81-70.

Booker added another 3, a driving dunk and a 20-footer down the stretch of the period that allowed Phoenix to match its biggest lead of the first half at 94-79. He made 6 of 9 shots in the period including 3 of 6 from behind the arc to lead the Suns to their seventh win in nine games.

Mikal Bridges added 26 points for Phoenix while Torrey Craig posted a double-double of 21 points and 14 rebounds while shooting 8 for 8 from the floor. Deandre Ayton (23 points, 11 rebounds) provided additional support as Booker notched his 22nd 30-point game this season.

Rockets guards Kevin Porter Jr. and Jalen Green combined for 43 points on 16-for-30 shooting, including 9 for 16 from deep as Houston shot 16 for 39 on 3-pointers. Porter added a team-high eight assists while Christian Wood paired 18 points with nine rebounds and Dennis Schroder totaled 17 points and six assists off the bench. Houston has lost 20 of its last 23 games.

Houston withstood a pair of haymakers in the first half, including a 16-2 start from the Suns that featured eight points from Ayton and a Craig dunk following a Bridges steal after the Rockets called a timeout in an attempt to stem the tide. But after a 1-for-8 start from the floor, the Rockets closed the opening period 10 for 16 including a 13-0 run that cut the deficit to 33-31.

Porter, Schroder and Green all nailed 3s during that rally, and when Phoenix pushed its lead to 57-47 on an Ayton free throw with 1:44 left in the half, the Rockets rallied once again with an 11-2 burst that included 3s from Green and KJ Martin plus a Jae’Sean Tate three-point play.

When Wood sandwiched a pair of dunks around a Booker pullup midway through the third, the Rockets pulled even at 69-69. That’s when Booker seized control and silenced the Rockets.